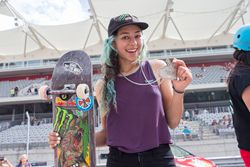 It was fun, I’ve never been to Austin before and it’s a really cool scene here. I really enjoyed walking around town and actually got stuck in the rain - Lizzie Armanto

Lizzie Armanto came to Austin as the defending champion after winning Gold in Women’s Skateboard Park at X Games Barcelona in 2013. The event took a two-year hiatus before returning this year as the first Women’s Park competition ever held at X Games Austin, this time featuring the youngest field of competitors in its history. Squaring off against 11 finalists, Armanto looked like the woman to beat with her signature fast-charging lines and powerful style. But competition was fierce on the sprawling concrete course peppered with a variety of hips, bowl corners, wallrides, and a centerpiece spine for air transfers.

Armanto started out dominant on her first run, charging into first place with a perfect routine featuring a huge backside method air off the wallride, backside Smith grind and lein to tailslide over the wallride channel, backside 50-50 the entire pool corner, frontside air into the pool corner, and ollie transfer over the channel onto the deck for an 82.66 point score. But ultimately, Nakamura edged ahead with a few crucial points after landing a difficult air transfer on her second run, leaving Armanto with the silver medal, her second career X Games medal.

“It was fun, I’ve never been to Austin before and it’s a really cool scene here,” said Armanto upon winning X Games silver. “I really enjoyed walking around town and actually got stuck in the rain. It was cool but at the same time it definitely wasn’t like back home.”

Having discovered skateboarding at the age of 14, Lizzie Armanto ranges among the most competitive female park skaters on the circuit. At her X Games debut, she won Gold in Women’s Park at X Games Barcelona 2013. Her video parts for sponsors such as Tony Hawk’s company Birdhouse Skateboards have consistently raised the bar as an inspiring role model for women in skateboarding. In April 2016, Lizzie took first place at core vertical skate event Vert Attack X in Malmo, Sweden and is currently working on a signature footwear line with her shoe sponsor Vans.