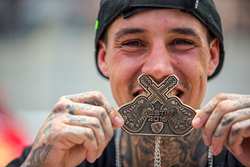 I truly did it for Dave, said Baldock. I saw his kids in the crowd and just went for it with the double backy - Kyle Baldock

Monster Energy congratulates Kyle Baldock on his bronze medal in BMX Park and Gold in the first-ever Dave Mirra Best Trick contest. Day 3 of X Games Austin 2016 saw Baldock take to the park course like a man possessed. And perhaps he was, considering he was one of the last guys to session with former Monster Energy Ambassador and BMX legend Dave Mirra who tragically passed in February.

Undoubtedly, one of the most powerful moments of X Games Austin unfolded today as the Dave Mirra Best Trick Contest went down. Mirra was a pioneer in freestyle BMX and one of the primary reasons it is the sport it is today. Simply put, his impact was profound to say the least. That said, today’s best riders showed up to pay their respects to the legend for the Best Trick contest which now bears Mirra’s name.

“He was like a father figure,” Baldock said of Mira, “I don’t think I would be who I am today without him.”

With that, Kyle gave a packed crowd a moment to remember blasting a massive 720 double tail whip off the parks biggest feature en route to the victory.

As fans lost it in disbelief the judges were left stunned having no choice but to award the Golden Pedal award to the kid from the Gold Coast of Australia.

This came just minutes after taking Bronze in the BMX Park contest where after a fall on his initial run Baldock dropped in to his final run like a man on fire effortlessly chucking flairs in both directions, a corked 720 and a stunning double back flip mid run.

“I truly did it for Dave, said Baldock. I saw his kids in the crowd and just went for it with the double backy.”

The feat secured his only X Games Bronze (his other 5 medals are all Gold).

Despite his accomplishments Baldock acknowledged that today was not about him stating, “All I want to do is give back the same love and respect to our sport that my friend Dave did.”