Monster Energy’s Troy Brosnan (AUS) has taken another Crankworx Downhill win this past weekend at the Canadian Open Downhill event in Whistler, Canada – his second win of the four-stop tour. 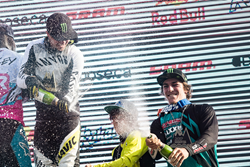 Just to make it out alive is one thing, but to take the win is another – I’m super stoked - Troy Brosnan

Monster Energy’s Troy Brosnan (AUS) has taken another Crankworx Downhill win this past weekend at the Canadian Open Downhill event in Whistler, Canada – his second win of the four-stop tour. The young Australian took home the crown on the gnarliest track of the entire circuit for the third year in a row at the fourth and final round of the Crankworx World Tour in Whistler, Canada.

Known for its blown out roots and rocks in some of the driest conditions ever seen in Whistler, the Crankworx Canadian Open DH track is known as one the toughest tracks for competitors. Steep and technical, it winds down from the Whistler mid station all the way to skiers plaza. After weeks of hot, dry temperatures, the track itself was filled with craters and moon dust inches deep making traction and cornering tricky business.

“It’s crazy here”, said Brosnan. “To get the three-peat is something pretty special. I knew that I could do it, but actually getting it done was a whole other task. My run was super pinned and I hung it out a few times. With it being so dry and dusty you really had to hang it out and get loose to go fast. It’s a hectic race! Super gnarly, dusty and filled with holes and rocks, and there is a lot going on. Just to make it out alive is one thing, but to take the win is another – I’m super stoked.”

With two big races left on the international calendar, Brosnan is hoping to carry his success here into World Cup finals next week and World Championships at his homeland in Australia in two weeks.

“It's going to be crazy,” said Brosnan. “Coming off of this win will help build some confidence for World Cup finals in Val di Sole [Italy]. I've done well there in the past so all I can do is go for the win and hope the rest works out for the overall. It’s definitely going to be checkers or wreckers! Racing Worlds in my home country is going to be pretty amazing, but we’ll see how it goes, I don’t want to put to much pressure on myself.”

With this win, Brosnan also took home the Crankworx Series Overall downhill title with two wins over the four-race series, the first being on the second round in Les Gets, France.

Joining Brosnan in a successful Crankworx week was Monster Energy’s Mitch Ropelato (USA). The American took home 2nd in the pump track event and 3rd in the Dual Slalom. The master of fun was narrowly edged out of the King of Crankworx title, which would have required a win in the pump track to take home the $25k bonus check.

The battle for the overall World Cup series title is down to the wire now, with only one race remaining on August 26-27 in Val Di Sole, Italy.