What a weekend! The 19th consecutive X Games in the heart of the Rocky Mountains is officially a wrap. Monster Energy congratulates its snowboard, freeski, and snow bike athletes on a dominant performance at X Games Aspen 2020. During the four-day event, the world-class team claimed a total of 22 X Games medals, including ten gold, five silver and seven bronze. 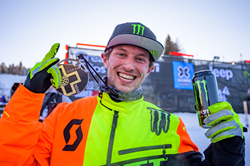 What a weekend! The 19th consecutive X Games in the heart of the Rocky Mountains is officially a wrap. Monster Energy congratulates its snowboard, freeski, and snow bike athletes on a dominant performance at X Games Aspen 2020. During the four-day event, the world-class team claimed a total of 22 X Games medals, including ten gold, five silver and seven bronze. Visit monsterenergy.com for exclusive content on all the team’s highlights.

Showcasing the state of the art in action snow sports, X Games Aspen 2020 awarded 59 medals in 21 disciplines. A total of 166 athletes from 21 countries competed in the event that was streamed online and televised to audiences across the globe. The spectacle also attracted 111,500 on-site spectators over the course of four action-packed days.

Here’s the play-by-play of how the action unfolded at X Games Aspen 2020:

Continuing Thursday’s podium run, the brand-new Ski Knuckle Huck event showcased creative freestyle moves off the Big Air ramp’s roll-over, also called the ‘knuckle’. In a major upset, 22-year-old Colby Stevenson from Park City, Utah, clinched the gold medal in his X Games debut by landing standouts like left 540 into a switch butter 720 Japan out. And the rookie was just getting started…

As the biggest day of competitions at of X Games Aspen 2020, Saturday awarded gold medals in a total of nine events – and Monster Energy athletes proceeded to claim a whopping six of these medals.

Starting things off, Monster Energy’s Jamie Anderson came, saw and conquered in the Jeep Women’s Snowboard Slopestyle final. Tech rail tricks like 50-50 gap to 50-50 backside 180 out, Cab 270 on to 270 out, and switch tailslide 270 and aerials such as frontside 720 Indy, Cab double underflip Indy, and backside rodeo 720 earned Anderson gold and a new record: She surpassed Shaun White and Mark McMorris for holding the most Snowboard Slopestyle gold in X Games history at six medals.

Joining her on the podium, Kokomo Murase took bronze as her second medal of the weekend. Highlights such as 50-50 transfer to boardslide to tailtap out, boardslide 270 out, and 50-50 frontside 180 Indy out on the rails, plus aerials like Cab 540 Indy, backside 720 mute, Frontside double cork 900 Indy, and switch backside 180 mute in the jump section earned Murase her fourth X Games medal (1 gold, 2 silver, 1 bronze).

In the day’s next medal event, Monster Energy’s Doug Henry from Torrington, Connecticut, came into the Para Snow BikeCross final as the defending gold medalist. Proving that age is just a number, the 50-year-old dominated the race with a 5:22.189 overall time to claim the gold medal, riding on a 15-second lead on silver medalist Brandon Dudley.

When the focus shifted from freestyle tricks to raw speed and acceleration in Wendy’s Snow BikeCross, Monster Energy’s Cody Matechuk was looking for a threepeat victory after back-to-back gold medals at Aspen 2018 and 2019. After a tense crash in the semi-finals, Matechuk soared ahead of the pack in the final race with an 8:42.768 overall time, finishing 15.641 seconds ahead of Yanick Boucher in second. Matechuk thereby joined the list of motorized winter sports athletes who have earned threepeat gold medals at X Games, including Blair Morgan, Tucker Hibbert, and Mike Schultz.

In the competitive Women’s Ski SuperPipe final, all eyes were on defending gold medalist Cassie Sharpe. Competing in the new 30-minute jam format proved difficult for the 27-year-old from Comox, Canada. Sharpe soared the highest airs and posted technical tricks like rightside 900, flair, 360 to fakie, left 900 tailgrab and a 11’2” high, fully inverted 1080. But Sharpe ultimately had to settle for the bronze medal, her fourth X Games podium (2 gold, 2 bronze).

Ending an epic day on a high note, Monster Energy athletes claimed two podium spots in the The Real Cost Men’s Snowboard Big Air final. Monster Energy’s Max Parrot returned to Aspen after having missed the event in 2019 due to a battle with Hodgkin Lymphoma cancer. Fully recovered and returned to competition, Parrot unseated defending gold medalist Mark McMorris by landing his very first frontside triple cork 1620 mute in competition, followed by a Cab triple cork 1620 Indy and backside 1620. Parrot also stomped a Cab triple cork 1800 Indy, a trick that won him gold in 2018 and again sealed the deal in 2020.

The fourth and final day at X Games Aspen 2020 kicked off at noon local time under blue skies with a double podium for Monster Energy in the Jeep Women’s Ski Slopestyle event. Fresh off her Big Air bronze medal, Sarah Hoefflin had the right formula for the 35-minute jam session: Leftside 450 on 270 out and switch rightside 270 on the rails as well as 540 mute, bio 720, left cork 900 tailgrab, alley-oop 360 mute, and switch right bio 900 in the jump section earned the 29-year-old from Geneva, Switzerland, the silver medal.

Hoefflin was joined on the podium by her Monster Energy teammate, 21-year-old Maggie Voisin from Whitefish, Montana. Having won Slopestyle gold in 2018 as the first American rider in X Games history, Voisin demonstrated why she is still a podium threat and threw down technical rail moves and switch left 900 mute, leftside 720 tailgrab, rightside 900, and a huge 540 rodeo in the jump section for the bronze medal.

Next up, progression was the name of the game in the first-ever Jeep Snowboard Slope Rail Jam focused on the three rail sections on the Slopestyle course. Monster Energy’s Darcy Sharpe brought the right repertoire to the mix and claimed silver by posting bluntslide 270 on the rainbow rail, Cab lipslide fakie, hardway switch 270 bring-back, lipslide 270 out, frontside boardslide to fakie, and 50-50 360 out. Following closely in third place, Sven Thorgren earned his sixth X Games medal by sending backside 360 to 50-50 to frontside 180 out, Cab 270 on 450 out, Indy grab to backside lipslide fakie, and Cab 450 on 270 out down the rails.

Monster Energy athlete and snow bike pioneer Brett Turcotte finally had his moment to shine in the six-rider final. After crashing his bike on the first of two attempts, the 31-year-old from Clearwater, Canada, put it all on the line and pulled an extended superman backflip – hanging from the handlebar horizontally in mid-air – for 79.33 points and his first gold in the discipline.

Turcotte now owns eight X Games medals (3 gold, 4 silver, 1 bronze) and was joined on the podium by his Monster Energy teammate and motocross icon Jackson Strong. Competing in a #24 Los Angeles Lakers basketball jersey in tribute to NBA superstar Kobe Bryant, who had tragically passed away earlier on the same day, Strong pulled a nac nac to no-footer backflip on his second run. With a highest score of 75.66 points, the 28-year-old from Lockhart, Australia, claimed bronze, his twelfth X Games medal (6 gold, 4 silver, 2 bronze).

One more thing: As the final trophy of the weekend, X Games presented Monster Energy freeskier Colby Stevenson with the Jeep Best in Snow Award voted for by the X Games panel. The 22-year-old received the honorary Golden Grille trophy for making history as the first-ever rookie to win the Ski Slopestyle competition. What a weekend!