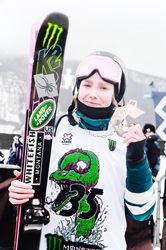 The fifth edition of X Games Norway is officially a wrap! Monster Energy, the official energy drink of X Games Norway 2020, congratulates its athletes on a strong performance at the world’s premier action sports event. Over the course of two-action-packed days, the world-class team earned nine medals across Freeski and Snowboard disciplines, claiming three gold, three silver and three bronze medals. Visit monsterenergy.com for exclusive content on all the team’s achievements.

Now in its fifth consecutive year and supported by Monster Energy as the official drink sponsor, X Games Norway 2020 showcased the highest level of progression in freestyle snow sports. The event was followed by a live audience at Hafjell Alpinsenter (about 120 miles north of Oslo) and connected live stream viewers worldwide.

Here’s how the action unfolded for team Monster Energy across Ski and Snowboard disciplines in Norway this weekend:

After losing the handle on his first two attempts over the massive Big Air jump, Parrot managed to regain his momentum with a perfect Cab triple cork 1620, backside 1620, and frontside triple cork 1620 mute. But due to the new judging format determining winners based on overall impression, the 25-year-old from Bromont, Canada, had to settle for silver and hope for another shot at gold in Sunday’s Snowboard Slopestyle event.

Also rising to the podium, Japanese snowboard phenom Kokomo Murase came into the contest as the youngest competitor at 15 years of age. She still emerged with a silver medal on the strength of rail moves such as pole jam Indy grab and frontside lipslide 270 out, plus frontside double cork 900, frontside 720 stalefish, and a backside 1260 with a slightly imperfect landing. After what is only her fourth X Games appearance, Murase now owns five X Games medals (1 gold, 3 silver, 1 bronze) across Slopestyle and Big Air disciplines. Definitely keep an eye on this teenager!

Voisin was joined on the podium by Monster Energy’s Giulia Tanno, who earned a bronze medal in the heated final session. Rail moves like a 450 off and aerials including switch 900 tail grab to an awesome double cork 1080 safety grab convinced the judges and stoked the crowd at Hafjell Alpinsenter. Tanno’s X Games track record now boasts four medals (2 silver, 2 bronze) and she recently claimed the FIS 2019/20 Big Air World Cup crystal globe trophy as the top rider of the season.

In the day’s biggest surprise, Max Parrot went blow-for-blow against Mark McMorris in the Monster Energy Men’s Snowboard Slopestyle final. Determined not to leave Norway without a gold medal, Parrot put down four impeccable runs featuring tech rail tricks such as gap backside 360 to 50-50 the kink rail and a pole jam Wildcat backflip. In the jump section, the Canadian put down hammers including backside triple cork 1440 melon and a Cab triple 1620 Indy grab to claim what is only his second Slopestyle gold after his win at XG Aspen 2014.

Download photos from X Games Norway 2020 for editorial use.

Overall, the Monster Energy team dominated on the final day of X Games Norway 2020 by claiming three gold medals in the four events contested on Sunday. With the world’s best Ski and Snowboard athletes bringing the stoke to Scandinavia, this fifth edition of X Games Norway ended the 2019/20 snow season on a high note. Thanks to the crew at ESPN and Hafjell Alpinsenter for putting on a spectacular show followed by fans across the globe. And thanks to everyone for tuning in – see you next time!

X Games fans who missed the action at X Games Norway 2020 this weekend can re-watch all live broadcasts on the official X Games YouTube channel.