Monster Energy congratulates its snowboard and freeski athletes on a dominant performance at X Games Aspen 2021. During the three-day live event, the world-class team claimed a total of 14 X Games medals, including seven gold, four silver and three bronze. 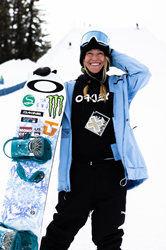 What an epic weekend for snow sports! The 20th consecutive X Games in Aspen Snowmass is officially a wrap. Monster Energy congratulates its snowboard and freeski athletes on a dominant performance at X Games Aspen 2021. During the three-day live event, the world-class team claimed a total of 14 X Games medals, including seven gold, four silver and three bronze. Visit monsterenergy.com for exclusive content on all the team’s highlights.

In response to the ongoing COVID-19 pandemic, X Games Aspen 2021 was closed to the public without the usual spectators and musical performances on site. But fans across the world tuned in by the millions: X Games Aspen 2021 was streamed live on ESPN’s U.S.-based media platforms and televised globally in 192 countries and territories to more than 500 million homes. Fans also had a chance to join a virtual online experience, X Fest, featuring games, giveaways, and content from sponsors including Monster Energy.

Contested amid strict pandemic safety protocols, the event successfully awarded medals in all events, including a number of history-making performances. Here’s the play-by-play of how the action unfolded this weekend at X Games Aspen 2021:

When the action moved into the Women’s Ski SuperPipe final, seven of the world’s best halfpipe riders took on the 22-foot-high snow structure. The jam session culminated in a head-to-head rivalry between 28-year-old Cassie Sharpe from Comox, Canada, versus X Games newcomer Eileen Gu from China. Sharpe set the bar with a flawless first run including a brand-new leftside 1260 air blasted 10’9” high and a fully inverted 1080. But after suffering a heavy fall on Run 2, Sharpe had to withdraw from competition settling for the silver medal, bringing her X Games record to five medals (2 gold, 1 silver, 2 bronze).

The second day of X Games Aspen 2021 continued the team’s medal run in the highly anticipated Monster Energy Women’s Snowboard SuperPipe final. The biggest story was the return of the ‘Queen of the SuperPipe’, 20-year-old snowboard phenom Chloe Kim after her freshman year at Princeton University. Picking up right where she left off with her win at Aspen 2019, Kim posted diverse runs, including a huge method air at 13'7" altitude, big 360 air to fakie, frontside 1080 tailgrab, and switch 720 Weddle to claim her sixth career X Games gold medal. The Olympic gold medalist now owns eight X Games medals (6 gold, 1 silver, 1 bronze) in SuperPipe. Welcome back!

With several Saturday events postponed due to inclement weather, Sunday emerged as the weekend’s biggest day of competitions. The Monster Energy team’s medal run also reached its peak, as athletes claimed a whopping nine medals (4 gold, 2 silver, 3 bronze) and reached the podium in all six events on the final day of X Games Aspen 2021.

Starting things off, Sunday morning saw X Games history in the making. No rookie had ever won gold in Men’s Snowboard Slopestyle in 20 years of Winter X Games. That was until X Games rookie Dusty Henricksen stomped a winning run for the ages wearing only a short-sleeved T-shirt on a crisp day. On the strength of moves like a backside 1440 Weddle grab and a double crippler double grab melon to stalefish, Henricksen took gold and also became the first American rider to win Men’s Snowboard Slopestyle since Shaun White’s victory at X Games Aspen 2009. Also rising to the podium, 21-year-old Rene Rinnekangas from Iisalmi, Finland, found his groove in the final and landed a bronze-medal run.

Aerials were also the name of the game in the Pacifico Women's Snowboard Big Air final. Viewers were in for another major surprise, as Monster Energy’s Jamie Anderson came, saw and conquered the jam session over the 70-foot-long gap. Enormous airs like frontside double cork 1080 and a highly technical Cab backside double cork earned Anderson her very first gold in Big Air. She is officially the most decorated woman in X Games history at 19 medals total (8 gold, 7 silver, 4 bronze). Anderson shared the podium with kiwi ripper Zoi Sadowski-Synnott, who earned the bronze medal by landing a massive backside 1080 Weddle grab on her fourth attempt.

Ending the weekend’s snowboard action on a high note, the The Real Cost Men’s Snowboard Big Air final showcased an extraordinary level of trick evolution. As riders posted never-been-done tricks and 1800-degree rotations, 26-year-old Sven Thorgren from Stockholm, Sweden, held his own. After landing a Cab 1620 and flat-spin backside 1800 melon over the 70-foot gap, Thorgren landed a banger on the very last attempt of the night: A perfectly executed Cab 1800 roast beef earned the Swede silver as his 7th X Games medal seven (1 gold, 2 silver, 4 bronze).

For the grand finale, Wendy’s Ski Knuckle Huck finished X Games Aspen 2021 on a creative note. Eight of the world’s most gifted freeskiers ‘hucked’ technical and stylish moves off the Slopestyle jump ramp’s roll-over. But there could only be one winner: 29-year-old freeski icon Henrik Harlaut from Åre, Sweden, went to work on the knuckle, flexing the tips and tails of his skis through a number of never-been-seen tricks. The judges awarded Harlaut the gold medal, expanding his legacy as the most decorated ski athlete in X Games history with thirteen medals to his name (8 gold, 5 silver). What a way to end an epic showing for team Monster Energy at X Games Aspen 2021!

Thanks to all athletes, everyone who attended and all who watched for a history-making event. Also thanks to the crew at ESPN and Buttermilk Mountain for putting on a world-class action sports showcase despite the adversities of the ongoing pandemic.