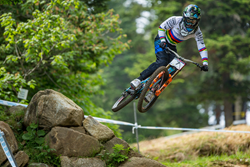 I was just relaxed at the top like I always am when it rains and I had a good ride. That’s it! It might sound cliché, but I just rode in the water and it was really good. - Danny Hart

This year marks the 25th anniversary that the World Cup has been held at Mont-Sainte-Anne featuring many technical sections on one of the most physically demanding courses on the World cup circuit.

After a week of loose and fast practice in the dry, Mother Nature decided to turn the tables on race day and cranked up the excitement level by dumping monumental amounts of rain on the field just as the top 30 men were about to drop in. Rough and incredibly blown out after three days of riding in the dry, the track somehow remained grippy enough in the deluge that those who were brave enough to hold it wide open were able to find some semblance of traction on Sainte Anne’s notorious rocks.

The heavy rain caused chaos amongst the elite men, but Hart navigated the tricky conditions well, and put down a run that would be good enough for third place, just 1.4 seconds off the win, a feat that not many could match given the conditions. The defending world champion had no way to explain how he is in his element once the weather goes south.

“I don’t know,” said Hart. I was just relaxed at the top like I always am when it rains and I had a good ride. That’s it! It might sound cliché, but I just rode in the water and it was really good. I can’t wait to watch [the replay] back later. “

Brosnan wound up 3.5 seconds off the pace when he broke the beam, but couldn’t have been happier with his ride.

“That was crazy! I was at the top and it was bucketing down,” said Brosnan. I kind of knew what to expect because I have had this happen here before in qualifying. I knew it would be grippy, but just rolling a bit slower and the woods slippery. I pushed it! I was going for it for sure, to come down only two seconds back I was pretty stoked. I’m happy to get 6th and get lots of points in the overall. It’s a battle to the end now! To be in one piece after that is crazy.”

The battle for the overall World Cup series title is down to the wire now, with only one race remaining on August 26-27 in Val Di Sole, Italy. Watch for Brosnan and fellow Australian and Monster Energy teammate Sam Hill as they head to Whistler, BC this coming week to take on a world-class field at the Crankworx festival before heading back to Europe.