Prepare for the latest evolution of the world’s premier action sports showcase! In just a few days, Monster Energy’s team of world-class athletes will compete at X Games Shanghai 2019. 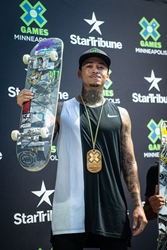 Prepare for the latest evolution of the world’s premier action sports showcase! In just a few days, Monster Energy’s team of world-class athletes will compete at X Games Shanghai 2019. As a unique action sports experience, X Games Shanghai will welcome some of the biggest names in BMX, motocross, and skateboarding in a battle for X Games medals from June 1 – 2 at the Shanghai International Tourism and Resorts Zone.

X Games Shanghai will feature nearly 75 athletes from 12 countries in seven disciplines across Skate, BMX and Moto X. Each day will showcase a full schedule of competitions, including finals and medal presentations. Along with world-class action sports competitions and athletes, X Games Shanghai will also include musical performances, art installations and a festival experience while showcasing China’s unique youth culture.

Monster Energy is looking forward to bring the stoke to China with a heavy-hitting team including headline competitors such as Nyjah Huston (Skate) James Foster (BMX), and Jackson Strong (Moto X). Visit monsterenergy.com for a full list of invitees and watch out for the following key athletes and events this weekend in Shanghai:

In Skateboarding, Sunday’s Skateboard Street event will see reigning SLS Super Crown Champion Huston looking for his tenth gold medal in X Games Street. Fresh off a win at last weekend’s SLS World Tour stop in London, the 24-year old who has been competing at X Games since age 11 will be facing a stacked field of the world’s best street skaters. Huston already holds the record for most X Games Street Gold medals and overall medals (14 and counting), but claiming a win in Shanghai won’t be easy: Huston’s biggest rival is Monster Energy teammate Kelvin Hoefler from São Paulo, Brazil, who kept close on his heels at last year’s SLS World Championships. Recently relocated to California, the 26-year-old tech street skater has medaled in every single X Games appearance since making his debut with back-to-back gold in Minneapolis (2017) and Norway (2018). Prepare for a heavy battle on the innovative street course featuring a Chinese Dragon obstacle as a centerpiece this weekend.

Over in the Skateboard Big Air event, 18-year-old rookie Trey Wood returns to the Mega Ramp as a bona fide podium threat. With a few new tricks up his sleeve, Wood has earned consecutive Big Air bronze medals at X Games in 2018 (Minneapolis and Sydney), and has placed in the top five in four out of six Big Air starts. He was a mere 11 years old when he first competed in Big Air at X Games Los Angeles in 2012 and has since evolved into a well-rounded rider with serious chops in the Park Skateboarding discipline. The rookie will be joined by one of the pioneers of Big Air skateboarding: Australia’s Jake Brown is back for more after six X Games gold medals and 23 X Games appearances. Rounding out the field, Monster Army young gun Evan “Big E” Doherty from Valley Center, California will be making his third X Games appearance this weekend. Watch out for the 16-year-old who landed his first 900 at age 11 and has already competed in over 100 events.

Let’s move on to Freestyle Motocross where Monster Energy blazes into Shanghai with a dominant squad of rookies and legends in the sport. Kicking things off, Saturday’s Moto X Best Trick celebrates the return of the most successful competitor in the discipline in X Games history: Monster Energy’s Jackson Strong is back after missing X Games Sydney 2018 due to an injury and looking to expand on a perfect record of five medals in five starts (4 gold, 1 silver). ‘Jacko’ has been training on his compound in the Australian outback and stoked viewers in March with the premiere of his boundary-pushing television feature ‘Jackson Strong’s Moto X Dirt Part 2’.

Also gunning for the Moto X Best Trick podium, his Monster Energy teammate and Australian motocross icon Josh Sheehan will be looking to improve on a bronze medal from Sydney 2018. FMX innovator Taka Higashino will be putting on a freestyle motocross showcase in his 13th X Games appearance. The three-time X Games gold medalist will be the oldest competitor in the discipline at X Games Shanghai, while the youngest competitor is Monster Energy’s Harry Bink, who closely missed the podium in Minneapolis last year after dealing with a dislocated shoulder. Audiences in Shanghai are in for a legendary session, as the squad has contributed some major feats to motocross history, including: the world’s first triple backflip (Sheehan, 2015), the first Rock Solid front flip (Bink, 2017) and the first Japanese athlete winning an X Games medal (Higashino, 2010).

In Moto X Best Whip, the entire Monster Energy motocross squad will be sending it over the mega kicker this Sunday with contorted airs, also known as ‘whips’. In this spectacular display that favors style over trick difficulty, the man to beat is Monster Energy’s Australian motocross powerhouse Jarryd McNeil, who is also sending it in Moto X Best Trick. At X Games Sydney 2018, the 27-year-old motocross legend defended his Moto X Best Whip gold medal to become the most-winning Australian athlete in X Games history with seven career gold medals and 12 medals in total.

Last, but definitely not least, Monster Energy heads into the weekend’s BMX events with a team of podium contenders. The action will kick of on Saturday with BMX Big Air, where Monster Energy’s James Foster from Redlands, California is looking to improve on his BMX Big Air bronze from X Games Sydney 2018 and get back on top after winning in Minneapolis 2017 and 2018. If he wins in Shanghai, Foster would tie BMXers Chad Kagy and Kevin Robinson for most gold medals in the discipline. He will be joined by teammate and Australian BMX legend Andy Buckworth who is one of the few riders on the planet with a BMX double frontflip and already has one X Games Big Air bronze medal to his name.

And finally, all eyes will be on Monster Energy team rider Alex Donnachie in Saturday night’s BMX Street competition. In a history-making performance at X Games Sydney 2018, the rookie clinched the gold medal and became the first person from Scotland ever to earn an X Games medal. Will he be able to best the world’s best BMXers again? Definitely keep an eye on Australian new school talent Lewis Mills, who took silver in Sydney 2018 and officially joined the Monster Energy team this February. Also don’t count out award-winning BMX innovator Dakota Roche who will be looking for his fourth medal – perhaps his first gold at X Games Shanghai this weekend?

X Games fans in the United States can watch live competition coverage from the inaugural X Games Shanghai beginning Friday, May 31, on ESPN2, ESPNEWS and the ESPN app. Additionally, three hours of event recap coverage will air on ABC as part of the World of X Games series, beginning Saturday, June 9. Fans can follow the latest news and highlights across ESPN digital platforms, including XGames.com and X Games pages across YouTube, Twitter, Facebook and Instagram.

In addition to all of the content on ESPN’s U.S.-based media platforms, X Games Shanghai 2019 will be distributed locally in China through media partners iQIYI, Tencent and YOUKU. Competition highlights throughout the weekend will be available on Weibo, the exclusive social media platform of X Games Shanghai. For viewers in Europe, live pay-per-view coverage will be provided throughout EMEA via subscription video-on-demand service ESPN Player, which is available in 132 countries across Europe and selected territories in Asia.