Not your average sports podcast! Monster Energy is proud to announce the launch of Unleashed with The Dingo and Danny Podcast on major platforms today. 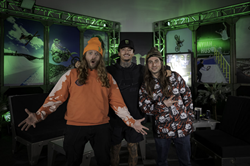 Not your average sports podcast! Monster Energy is proud to announce the launch of Unleashed with The Dingo and Danny Podcast on major platforms today. Hosted by Australian action sports personality Luke “The Dingo” Trembath and professional snowboarder / Olympic Medalist Danny Kass, the new podcast fueled by Monster Energy sets out to celebrate the lifestyle of action sports, motorsports, MMA, music, art, and affiliated pop cultures.

Filmed on a special set inside Studio M at Monster Energy headquarters in Corona, California, the podcast premieres today with the first episode, featuring pro skateboarder and Monster athlete Nyjah Huston. For the second episode of Unleashed with The Dingo and Danny, look forward to motocross icon Ryan Villopoto facing candid questions from the two hosts.

Fans can now visit https://www.monsterenergy.com/news/unleashed-podcast-fueled-by-monster-energy to experience the first episode of Unleashed with The Dingo and Danny Podcast.

The new podcast is hosted by the dynamic duo of snowboard icon Kass and Monster Energy brand personality Trembath (The Dingo). Known for their deep roots in action sports and pop culture, the two podcast hosts starred in the beloved cult TV show ‘The Adventures of Danny and The Dingo’ on Fuel TV for five action-packed seasons in the early 2010s. Trembath co-hosted The Jason Ellis show on Sirius XM from 2008 to 2020. Both hosts have built storied careers as pro snowboarders and possess the interview skills to find common ground with any guest. Now they’re back to have authentic conversations that ring true in the minds of fans and core practitioners.

Unleashed with The Dingo and Danny Podcast is here to celebrate the personalities behind the Monster Energy lifestyle. With each episode dedicated to a unique guest or topic, listeners learn about living on the edge and advancing the state of the art in the world of high-energy sports from individuals at the top of their game to musicians, artists and lifestyle and influencer icons. More than a drink, Monster Energy is a way of life lived by athletes, sports, bands, believers and fans – and the podcast is an extension of this unique DNA.

Expect candid conversations, classic quotes and never-told-before insider stories. Also expect answers to questions like: What drives these athletes to soar above the rest in competitions? How can they keep pushing the boundaries of what is humanly possible in their respective sports? Can they share any secrets to success and life lessons with listeners and what is their most treasured possession?

Kicking things off, Unleashed with The Dingo and Danny Podcast welcomes pro skateboarder and Team USA Olympic athlete Huston. As the winningest professional street skater in history, Huston has won 23 Street League Skateboarding competitions and became the Street Skateboarding World Champion in 2019 for the third consecutive time. Slated to represent the United States in skateboarding’s debut at the Tokyo Olympics this summer, Huston catches up with The Dingo and Danny on current video projects, getting into the mindset for larger-than-life tricks, and staying motivated despite the ongoing pandemic. And that’s just episode one…

As the second guest, Unleashed with The Dingo and Danny will sit down with motocross icon Villopoto. Raised in Washington, Villopoto started racing motorbikes at the age of 5, and never slowed down. His milestone-heavy career is full of boundary-pushing achievements, like becoming the first-ever Monster Energy Cup Champion and the sport’s first-ever million-dollar winner in 2011. Facing fast-paced questions by the two hosts, Villopoto speaks on the moments that defined his epic career in motorsports, raising twin sons who already race in the little leagues and the secret of taking it to the next level.