Prepare for the next exclusive live gaming event! Monster Energy returns to Twitch on Sunday, November 14, with another action-packed, star-studded stream in the “Live and Unleashed” series. 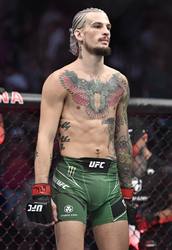 “Gaming and streaming are some my favorite things outside of fighting. Really excited to be on Live and Unleashed with the Dingo, Renée and Guapdad 4000. It will be a nice break for me during training camp while I prepare for another knockout at UFC 269.” - Sean O'Malley

Prepare for the next exclusive live gaming event! Monster Energy returns to Twitch on Sunday, November 14, with another action-packed, star-studded stream in the “Live and Unleashed” series. Hosted by popular snowboard personality Luke “The Dingo” Trembath, this third installment in the series brings together a powerful mix of MMA, music, and gaming talent for two hours playing one of today’s most popular online multiplayer battle royale games.

Following in the footsteps of the first two “Live and Unleashed” Twitch events, each garnering over one-million viewers, the upcoming battle royale stream is special for two reasons: First, it marks the first episode recorded at Studio M inside Monster Energy headquarters in Corona. Second, whereas initial episodes saw guests engaged in head-to-head battle against one another in titles such as EA Sports UFC 4 and Tony Hawk's Pro Skater 1 + 2, this episode is all about expanding the scope to public online play.

“This time we’re once again drawing on Monster Energy’s immense wealth of athletic, music, and gaming talent to show our fans some highly skilled players in the stream session. And for the first time in the Twitch series, the third episode will see three Monster Energy-sponsored players challenge real-life players on public online gameplay for several rounds of battles,” said Monster Energy's CMO Dan McHugh. “Hosted by the Dingo, the show brings all of our worlds together in a celebration of everything Monster Energy.”

Here’s show host, the Dingo, on what fans can expect November 14 on “Live and Unleashed” on Twitch: “Similar to our previous shows, our talent will be interacting with one another, talking about their craft, and playing the brand-new season of the popular battle royale shooter. Renée, Guapdad 4000, and ‘Suga’ O’Malley will be taking turns playing in three-person team format, attempting to rake up as many kills as possible,” said host Luke “The Dingo” Trembath. “We’ll play four games with rotating teams in public lobbies. At the end of the broadcast, the person with the most kills will walk away with our special Live and Unleashed trophy!”

According to Trembath, the show not only addresses hardcore gamers: “While this broadcast will be semi-serious in gameplay, the game truly only serves as a backdrop for our conversations! The players will interact and talk to me during the two-hour show to highlight not only their high-level gaming skills but the personalities of all the participants.”

“Gaming and streaming are some my favorite things outside of fighting” said Monster Energy’s Sean O’Malley. “Really excited to be on Live and Unleashed with the Dingo, Renée and Guapdad 4000. It will be a nice break for me during training camp while I prepare for another knockout at UFC 269.”

Don’t miss the game action and high-energy conversations on Sunday! In partnership with multiple Emmy award-winning TAUBLIEB Films, this not to be missed contest featuring MMA, music and gaming icons will be livestreamed via the official Monster Energy Twitch Channel on November 14 at 5:00 PM PDT on Twitch.tv/MonsterEnergy.

About Luke “the Dingo” Trembath
The Dingo is a one-of-a-kind personality whose fun-loving spirit and contagious energy has made him a mainstay on television for years. The former pro snowboarder is a leading voice of the action sports world & beyond, where he has done everything from announcing high profile sporting events, The MTV music awards to starring in five seasons of fuel TV’s “The Adventures of Danny & The Dingo”. Once you've met him, you'll agree – there's only one Dingo. A true social chameleon - The Dingo's ability to find common ground with anyone and adapt to any social situation makes him the perfect role model for kindness and acceptance among today's youth.

About TAUBLIEB Films
TAUBLIEB Films is a multi-Emmy Award winning production company led by director/producer Paul Taublieb. His work includes long-form feature documentaries such as the theatrically released “Blink of an Eye,” about the star-crossed friendship between Michael Waltrip and Dale Earnhardt, now being made into a feature film with Sony Pictures Entertainment and the Emmy award-winning ESPN 30 for 30 film, “Hawaiian: The Legend of Eddie Aikau,” narrated by Academy Award-nominated actor Josh Brolin. Also, the theatrically released “Fastest” about MotoGP racing and the Emmy award-winning Netflix documentary, “Unchained: The Untold Story of Freestyle Motocross,” named the best long-form documentary of the year, also narrated by Brolin. The Malibu, California-based company also produces a variety of long and short-form content for brands such as Monster Energy, ESPN, X Games, Showtime, NBC, ABC, Paramount Pictures, and Ferrari, including viral videos with literally hundreds of millions of views.

TAUBLIEB Films has also enlisted the support of marketing agency and brand studio Zoned Gaming to provide their industry expertise and support the production efforts on the launch of Monster’s Twitch channel and live stream series. Zoned will work closely under TAUBLIEB Films' creative direction to craft and execute a strategy to help expand the Monster brand in the gaming entertainment world.