Monster Energy’s Conor McGregor made history by knocking out Eddie Alvarez in round two, and winning the lightweight title to become the first UFC fighter to hold two titles simultaneously. 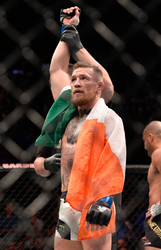 They have to have size, reach, length…you have got to have some attributes. If you come in any way equal to me I am going to rip your head off. Eddie is a solid competitor, Eddie is a warrior, but he shouldn't have been in here with me. - Conor McGregor

Monster Energy’s Conor “The Notorious” McGregor backed up his boasts and made history by knocking out Eddie Alvarez in round two, and winning the lightweight title to become the first UFC fighter to hold two titles simultaneously at the highly anticipated debut at historic Madison Square Garden in New York City. In addition, teammate Tyron “The Chosen One” Woodley retained his welterweight title after fighting to a majority draw against Stephen Thompson.

The featherweight champion, McGregor added to his legacy and legend with a wholly dominant victory, knocking out Eddie Alvarez at 3:04 of the second round to become the lightweight champion at UFC 205 at Madison Square Garden, before his adoring and rabid Irish and US fans.

The monumental sell-out event headlined by McGregor will go down as the biggest event in the history of MMA with record-breaking crowds and box-office records for UFC and Madison Square Garden now that UFC is live and legal in New York. McGregor delivered with a shockingly lopsided destruction of highly skilled veteran opponent Alvarez.

A confident Alvarez came at McGregor (21-3 MMA, 9-1 UFC) with early low kicks to start round one, but as he advanced McGregor countered with his deadly left hand and promptly dropped Alvarez to the canvas. While Alvarez sprang to his feet, his confidence was clearly shaken and McGregor’s Octagon control and accuracy would lead to two-more knockdowns in the first three minutes of the fight.

Alvarez (28-5 MMA, 3-2 UFC) narrowly escaped round one, and McGregor opened the second with a stinging left hand. “The Underground King” kept his feet under him, and for a moment Alvarez had some momentum landing a right and bullying McGregor against the cage. McGregor’s superb takedown defense and a quick reverse of the fence spelled the end for Alvarez. McGregor assumed the center of the Octagon and countered an Alvarez strike with a debilitating left cross and picture-perfect combination, putting the
lightweight champ to the mat with a TKO stoppage.

In typical McGregor fashion after the fight he reinforced what he’d stated before the fight that he wasn’t one bit surprised and “they are not at my level.”

“They have to have size, reach, length…you have got to have some attributes. If you come in any way equal to me I am going to rip your head off, it happens every time. Eddie is a solid competitor, Eddie is a warrior, but he shouldn't have been in here with me and that's just the truth of it,” said McGregor.

McGregor announced at the post-fight news conference he is expecting his first child in early 2017 and intends to take a break until then.

Welterweight champion and Monster energy athlete Woodley retained his title as he and challenger Thompson fought to a majority draw and ‘Fight of the Night’ award. Woodley who came in as the belt holding underdog caught Thompson with hard strikes and took him down for most of round one, landing vicious ground and pound with both fists and elbows.

In round four Woodley knocked Thompson down and looked like he was in route to a TKO stoppage until sinking in a deep standing guillotine on Thompson, and then taking that guillotine to the ground. Amazingly, Thompson survived Woodley’s choke and controlled much of the fight when the two warriors were on their feet. The judges ultimately scored the five-round fight 47-47, 47-47 and 48-47 in Woodley’s favor resulting in a majority draw. UFC President Dana White said, “An immediate rematch makes sense.” This is only the third time in UFC history that a title fight ended in a tie.