Monster Energy’s Sam Hill, Australia, kept things steady in the unpredictable Irish mud over the weekend to grab second place with just five seconds off the win at the Enduro World Series (EWS) Round 4 in Wicklow, Ireland. 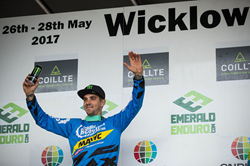 Monster Energy’s Sam Hill, Australia, kept things steady in the unpredictable Irish mud over the weekend to grab second place with just five seconds off the win at the Enduro World Series (EWS) Round 4 in Wicklow, Ireland.

Another EWS round with unfavorable rainy weather left big question marks as to what riders would face in the way of course conditions. With conditions changing all day varying from grippy, slippery, slimy and sticking mud on technical stages, it took steady consistent management to be on top of the standings. The weather didn’t stop the thousands of Irish fans from coming on to cheer Hill on through his six-stage adventure going 2-2-10-1-2-2 and landing him second place.

The five-time downhill World Champion, Hill stepped away from full time downhill racing to focus on winning the EWS. He has adapted fast and is taking his legendary flat pedal style and making a stamp on the World Series where he’s currently 2nd overall and a mere 20 points behind in the championship hunt.

Monster Energy’s Jared Graves took a stage 3 win, but didn’t have as much luck with the sticky mud on the other stages and ended up in 13th and sits 7th overall in the series.

With four rounds down and four to go, the EWS has come to its midpoint as we head into a short break before picking this back up in Millau, France June 30 – July 1.