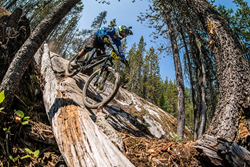 I obviously would have loved to win here, but second place is cool and it’s a really good haul of points for me to help extend my points lead heading into the last round - Sam Hill

The iconic backdrops of Whistler played host to one of the toughest EWS in history. Sunday was a monster of a race day with five massive stages featuring the likes of which many had never seen. Dubbed Crankzilla due to the extreme size of a few of its stages, the Whistler round did not disappoint. Right off the bat, riders dropped into the iconic Top of the World trail, with its mind-blowing background of mountains, including the famed Black Tusk. At just under 17 minutes of racing down some of the roughest, steepest trail on the circuit, it puts the best riders in the world to the test as arms, hands and brakes begin to fail towards the end. Hill demolished all comers winning stage one, putting a 17-second lead into second place to get the day underway.

As racing progressed over the next four stages, local racer Jesse Melamed slowly whittled away the gap until he took the lead on the second longest track of the day, stage 4. Consisting of basically what amounts to an eight-minute razor sharp rock garden, Hill backed off in order to make sure he kept air in his tires and would slip into second place heading into stage 5, through the Whistler bike park.

The Australian crossed the line with a massive triple over the final jumps into the finish arena, but couldn’t catch the lead, settling for a second-place finish, nearly 45 seconds ahead of third place.

“Stage 1 surprised me, being in the lead by so much, and in stage 2 I struggled to find my flow,” said Hill. I guess there really isn’t any to be had, and it’s really hard to beat someone as fast as Jesse on their home turf. I obviously would have loved to win here, but second place is cool and it’s a really good haul of points for me to help extend my points lead heading into the last round.”

Monster Energy’s big mountain rider Graham Agassiz (CAN) rode two days of practice before hurting an already injured ankle and having to pull out for fear of making it worse in the run up to Rampage early in the fall. Enduro favorite Jared Graves was unfortunate and had his day ended not even half way down stage 1 when a mechanical error caused his drivetrain to get into his wheel, stopping him in his tracks.

Hill was recently selected to be a member of the Australian Downhill Mountain Bike Team racing World Championships in Cairns, Australia. EWS racing resumes September 29-30 in Final Ligure, Italy where Hill will try to defend his series points lead and take the overall.