Monster Energy’s rampage through X Games Austin 2016 continues as Josh Sheehan leaves his mark on the muddied Texas course riding away with a hard earned gold medal, his first at X Games. 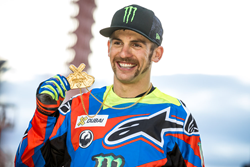 Monster Energy’s rampage through X Games Austin 2016 continues as Josh Sheehan leaves his mark on the muddied Texas course riding away with a hard earned gold medal, his first at X Games.

Despite heavy rains all week crews readied the Moto X Freestyle course in tireless fashion allowing athletes an opportunity to show their skills as crowds gathered for the event. In the end it was a non issue as riders gave the course their best under a warm, somewhat humid evening.

Sheehan, who made waves just over a year ago when he landed the sports first triple backflip at Travis Pastrana’s compound in Maryland is known for his commitment to his craft both physically and mentally. Today he showed how his discipline pays off by hitting the course with uncommon tenacity throwing variations into his tricks that we have yet to see before.

As the eighth rider in a field of ten, Sheehan had his work cut out for him against the likes of fellow teammates Nate Adams and Taka Higashino getting straight to work with a backflip heel-clicker on his first hit. Following that with a Rollo flip immediately into a flawlessly landed 540 flair Indian air, Sheehan was on pace for a high score if he could just hold on. Then, with just under six seconds left he throttled it and effortlessly floated a massive double backflip landing as clean as you could for a trick of such consequence.

“I didn’t quite get the heels clicked on my first jump so I knew that I had to step it up at the end there,” said Sheehan.

Enough for a 93.33 and a gold medal, this was Sheehan’s third total medal at X Games, adding to a couple bronzes, one in last year’s QuarterPipe and another in Best Trick 2011.

Ecstatic, Sheehan said, “After not too much freestyle last year I wasn’t sure I would make it here. I’m over the moon man!”

So what’s next from the wild rider from Down Under?

Not before a few more comps though. Sheehan is the only Moto X rider competing in four disciplines at X Games Austin, including Best Trick, Best Whip and the QuarterPipe event.