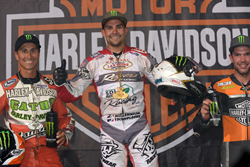 On a track that was essentially underwater just a day before due to torrential and often violent thunderstorms across South Texas, crews worked tirelessly to get the course in shape for the evening’s main event. However, Mother Nature was kind tonight as the clouds parted and the race went off as planned.

From the beginning it was anyone’s race with a mishap taking out two of last year’s top finishers on the first lap. Vying for the lead it was Mees and Coolbeth Jr, who provided the most intense action of the race toying with one another’s position early on. Yet by the 9th lap Mees began to secure his spot in the lead on his high-powered Harley.

Though Coolbeth, Jr. did give him a run for the money, ultimately Mees fended off his teammates tenacity for the remaining half of the race to take his first ever gold medal at the X Games.

“I got up to Jared and showed him a wheel too soon,” admitted Coolbeth. “He saw that, played defense and from there it was just following him.”

Meanwhile, Baker repeated his same feat of last year hanging on to third ahead of the pack of hungry racers.

Mees, who hails from the small town of Clio, Michigan and is a three-time AMA Pro Flat-Track Grand Champion was all smiles after the race adding, “It just feels amazing. You never know with this, it’s a dangerous sport and Mother Nature can play a part as well, so right now I’m just honored to win gold.”