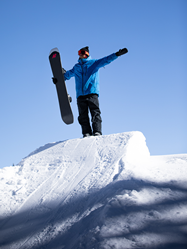 “When I signed on to Real Snow, I definitely took it as a full-on contest. At the end of the day, you want to win. When you go into that mindset, you try to get the best clips, film it the best you can, and give it your 110 percent." Sage Kotsenburg

Kotsenburg was joined on the podium by his Monster teammate, 28-year-old Kevin Backstrom from Ulricehamm, Sweden, who claimed the silver medal on the strength of a high-energy segment filmed and edited by Markus Wetterberg. And rounding out a full (virtual) podium sweep, the bronze medal and Fan Favorite award went to 27-year-old Ståle Sandbech from Rykkinn, Norway, for his visually stunning segment with filmer/editor Spencer “GimbalGod” Whiting.

Viewers can go online and watch all medal-winning entries from Real Snow 2021 on the X Games website.

The X Games Real series was launched in 2010 to capture the progression in action sports outside of the contest arena. Now in its twelfth year, the series awards full-fledged X Games medals for outstanding videos by invited teams of athletes and filmers across BMX, motocross, skateboard, freeski, and snowboard. The participants are free decide on the tricks, spots, and music featured in their 90-second video segments.

This year’s edition of Real Snow featured a new format: Instead of the exclusive focus on urban terrain, the focus shifted to all-terrain riding. As a result, the parts from six of the world’s most creative freestyle snowboarders showcased a combination of urban, backcountry, and snow park riding.

When all was said and done, this year’s Real Snow gold medal went to Kotsenburg and filmer/editor Jeremy Thornburg. Set to the shredding sounds of “Superman Seatgrab” performed by Logan Griffith and Andrew Aldridge, Kotsenburg’s video entry was filmed across powder-covered backcountry locations. But the tricks he puts down are on a level otherwise only seen in park riding, like Cab double cork 1260 and double 1080 rewind 900, which convinced the judges to award Kotsenburg the win.

“Taking home Real Snow gold is crazy. This is my first X Games gold. I’ve got a silver and a bronze and could never get to the top in Slopestyle and Big Air, so this means a lot!” said Kotsenburg upon winning Real Snow gold.

“When I signed on to Real Snow, I definitely took it as a full-on contest. At the end of the day, you want to win. When you go into that mindset, you try to get the best clips, film it the best you can, and give it your 110 percent,” said Kotsenburg.

This weekend’s Real Snow medal is Sage Kotsenburg’s first X Games gold. It brings his X Games count to three medals in total (1 gold, 1 silver, 1 bronze). No stranger to podiums, Kotsenburg won Olympic gold in slopestyle at the 2014 Sochi Games, but is mostly known for his style-driven video parts filmed on natural terrain. In February 2021, he received the Slush Magazine award for Men’s Rider of the Year in recognition of a standout season, including the boundary-pushing ‘Halcyon’ video project.

This year’s Real Snow silver medal went to one of the rock stars of core snowboarding, Kevin Backstrom. Teaming up with filmer and editor Markus Wetterberg, the Swedish pro snowboarder chose to film his segment right next to the slopes of famous Swiss resort, Laax. Going ‘off track’ with stylish moves – almost hitting the resort’s chair lift and sending an air over the après ski restaurant – impressed the judges and earned second place.

Claiming Real Snow silver marks the first X Games medal for Swedish team rider Backstrom. And it’s no surprise that it’s earned, not on a regulated competition course, but for a freeriding video part. Over the last years, Backstrom has flaunted his talents in critically acclaimed snowboard films such as ‘Arcadia’ and ‘The Future of Yesterday’, plus the BYND x MDLS web video series.

Finally, the bronze medal and Fan Favorite Award went to Ståle Sandbech from Norway for a visually engaging video edit. As the filmer, Sandbech chose Spencer “GimbalGod” Whiting, known for documenting snowboarding in close follow-camera style. For dramatic effects, the edit features surprising transitions between lines, cutting mid-trick to a new location for a free-flowing experience. Supplemented by tricks like a double chicane 1260, the 90-second edit earned a podium spot in Real Snow 2021.

Viewers who missed Sunday night’s World of X Games episode can watch an encore of Real Snow 2021 on ABC on April 3 at. 3 p.m. ET. Also visit the official X Games Real Snow homepage to see all six parts in their entirety. For a special treat, catch all X Games Real Snow ‘behind-the-scenes’ edits, in which the rider/filmer teams detail the making of their videos, including Sage Kotsenburg and Jeremy Thornburg (gold), Kevin Backstrom and Markus Wetterberg (silver), and Ståle Sandbech and Spencer Whiting (bronze).