Monster Energy, The Official Energy Drink Partner of X Games Aspen 2020, Is Ready to Bring the Stoke to Colorado with Its Team of the World’s Best Competing Athletes

Time to kick off a brand-new decade in winter action sports! Monster Energy, the official energy drink partner of X Games, is proud to announce its team of world-class athletes ready to compete at X Games Aspen 2020 at Buttermilk Mountain in Aspen, Colorado. 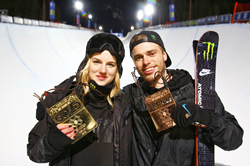 The 19th consecutive X Games in the heart of the Rocky Mountains will stoke fans with premium action sports and musical performances in a festival atmosphere from Thursday to Sunday. Last year, over 117,000 spectators set a new attendance record during four action-packed days.

With live coverage on ESPN, ESPN2 and ABC as well as digital X Games properties, X Games Aspen 2020 will continue the legacy by providing a stage for the world’s best athletes and a top-tier billing of urban and electronic musical talent. All action sports and festival elements will be free to the public, while ticketed musical performances on the GEICO Music Stage at the base of Buttermilk Mountain are set to include ILLENIUM, Bazzi, Alesso, and Rae Srummard.

X Games is the pinnacle of winter sports competitions, so the invite-only event is reserved for multiple-time X Games medalists and upcoming professionals in order to keep the level of riding world class. Visit monsterenergy.com for a full list of invitees and watch out for the following key Monster Energy athletes, including numerous defending gold medalists:

Defending her gold medal in Women’s Ski SuperPipe, Canadian Monster Energy athlete Cassie Sharpe returns to Aspen after shutting down the competition with a run for the history books in 2019. Will the Olympic gold medalist, whose brother and Monster teammate Darcy Sharpe is a certified podium threat in Men’s Snowboarding, add to her track record of two X Games gold and one bronze in the discipline? Stay tuned!

Also don’t miss the Great Clips Men’s Ski SuperPipe event, where 2018 gold medalist David Wise from Reno, Nevada, is looking to reclaim the top spot after finishing in second place at Aspen 2019. Known as the first skier to land doubles in all four directions in the same run, Wise took SuperPipe gold at the 2018 Winter Olympics and holds four X Games gold medals in the event. Also watch out as British-American athlete and 2018 Olympic silver medalist Gus Kenworthy looks to claim his (long overdue) first X Games gold medal. Perhaps the best all-around skier in the world, Kenworthy steps to the plate in Aspen as the only male athlete to compete in Ski SuperPipe, Slopestyle, and Big Air disciplines.

Speaking of Men’s Ski Big Air, keep an eye on Monster Energy’s Henrik Harlaut, who has a chance to make history this year: After claiming silver at X Games Norway in August 2019, Harlaut now ties his mentor, American freeski icon Tanner Hall, for most X Games ski medals in history at eleven total (6 gold, 5 silver). The Swedish innovator has a solid shot at setting a new record in Aspen. Especially since he’s also competing in Men’s Ski Slopestyle and the brand-new Ski Knuckle Huck event, focused on creative moves off the Big Air ramp’s roll-over (knuckle), next to rising star Colby Stevenson and veteran Tom Wallisch. And will this be the year Canadian rookie Evan McEachran claims his first-ever medal X Games after finishing in fourth place at Aspen 2019?

Also prepare for a heated showdown in Women’s Ski Big Air when Giulia Tanno from Lenzerheide, Switzerland, battles the world elite for another podium finish. In August 2019, the Swiss snowboarding prodigy claimed a well-earned silver medal in Ski Big Air at X Games Norway and currently holds first place in the International Ski Federation (FIS) Big Air World Cup rankings. Tanno will be facing heat from Monster teammate and Winter Olympics gold medalist Sarah Hoefflin looking to repeat her gold-medal finish from X Games Aspen 2018. And don’t count out freeski prodigy Maggie Voisin who has earned a podium finish before and is also a threat in Slopestyle.

Let’s move into snowboarding, where Monster Energy Men’s Snowboard SuperPipe is a headline event. All eyes will be on Japanese rookie and Monster team rider Yuto Totsuka, who barged into second place in his X Games debut at Aspen 2019. The 18-year-old has since claimed silver in the 2019 FIS Snowboard World Championships, plus a gold medal at the FIS Snowboard World Cup in Calgary, so he returns to Aspen as a top contender. Totsuka will be joined in the SuperPipe on Buttermilk Mountain by Swiss snowboard icon Iouri Podladtchikov looking for his fifth medal after missing the podium last year.

Monster Energy will head into Women’s Snowboard Big Air with the best of both worlds: Representing next-generation talent, 15-year-old Japanese snowboard phenomenon Kokomo Murase is coming in hot off a second-place finish at the recent Big Air Atlanta event. Murase has been turning heads since her upset victory at X Games Norway 2018, where she made history as the first girl to land a 1260 double cork in a competition. The newcomer will be competing against the most decorated woman in X Games history, Monster Energy’s Jamie Anderson, who is back in Aspen to bolster her impressive count of 16 overall X Games medals.

The level of riding will be off charts in the Men’s Snowboard Big Air event, as Canadian Monster rider Max Parrot returns after missing X Games Aspen 2019 due to his battle with Hodgkin Lymphoma cancer. Fully recovered, Parrot made an emotional comeback to competition by clinching gold at X Games Norway in August 2019 and has also claimed first place at Air + Style Beijing in December 2019. His competition includes Monster teammate Sven Thorgren – looking to improve on last year’s bronze medal – as well as Finland’s Rene Rinnekangas, Canada’s Darcy Sharpe, and Japan’s Ryo Aizawa.

Also prepare for a heavy showdown in Jeep Men’s Snowboard Slopestyle, where 20-year-old Monster Energy rider Rene Rinnekangas from Iisalmi, Finland caused a major upset with a silver medal finish in 2019. Rinnekangas will be taking on the world elite of Slopestyle, including 2018’s silver medalist and Canadian rookie pro Darcy Sharpe next to Max Parrot, Sven Thorgren and five-time X Games medalist Ståle Sandbech from Norway. Rounding out a heavy squad, Monster Energy’s Sebbe De Buck from Belgium and Carlos Garcia Knight from New Zealand will be gunning for their first taste of precious metal at X Games.

Women’s Snowboard Slopestyle will see 16-time X Games medalist Jamie Anderson bring back her all-round skills after being forced to drop out of the event due to injury in 2019. Now in its second year, the Wendy's Snowboard Knuckle Huck will showcase creative moves courtesy of Sharpe, Thorgren, Rinnekangas, and X Games Big Air gold medalist Halldor Helgason. Capping off a spectacular snowboarding schedule at Aspen 2020, the new Jeep Snowboard Slope Rail Jam will reward the gnarliest handrail moves on the course, with Monster Energy’s Sharpe, Thorgren, and Rinnekangas bringing skills to the battle.

Heading into motorized snow sports, Snowmobile Freestyle is bound to stoke the crowd as Monster Energy’s Brett Turcotte, who took silver in 2019 and gold in 2018, unveils his latest trick innovation. The seven-time X Games medalist kept the exact move a secret, but viewers can expect history in the making at X Games Aspen 2020. Let’s not forget Turcotte’s Monster teammate Joe Parsons, the most decorated snowmobiler in X Games history with 17 X Games medals (five gold), who is hungry for a podium this year. Also no stranger to podium spots, snowmobile freestyle innovator and eleven-time X Games medalist Heath Frisby has been perfecting his aerial moves on a special air bag in preparation for Aspen 2020, so the heat is officially on!

The focus will switch from freestyle aerials to raw speed and acceleration in the Wendy’s Snow BikeCross race. Tune in as Canadian Monster Energy team rider Cody Matechuk looks for a hattrick after back-to-back wins in 2019 and 2018. His direct competition includes teammate Brett Turcotte alongside motocross icons Axell Hodges and Josh Hill, both no strangers to high speeds but yet to claim their first snow bike medals.

Contested for the second time at Winter X Games, Para Snow BikeCross will see snow bike athletes who are not ambulatory taking on the BikeCross course with some alterations to their bikes such as hand control and seat modifications. The man to beat will be Monster Energy’s Doug Henry, who won the inaugural event last year and took home his first X Games gold medal in 14 years. Also look out for Alaska’s Paul Thacker, who claimed silver in Snowmobile SnoCross Adaptive in 2016 but has yet to earn a snow bike medal. Could this be the year?

But the field could be in for a harsh surprise if Monster Energy’s Kyle Demelo has his way: After almost landing the world’s first frontflip on a snow bike at X Games Aspen 2019, he successfully pulled the trick in March of last year. Landing the move in competition would be bound to make history this year – yet another reason to tune in and follow the action closely at X Games Aspen 2020!

ESPN, ESPN2, ESPNEWS and ABC will televise a combined 15.5 hours of live X Games Aspen competition, which will also be accessible via the ESPN App and WatchABC to viewers who receive their video subscription from an affiliated provider. In addition, all 15.5 hours of live content, plus exclusive competitions, musical performances and X Games Extra shows will be streamed on the @XGames YouTube, Facebook and Twitter pages.