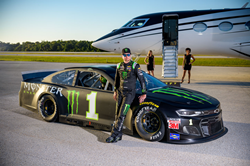 “We wanted to really create the imagery and the cinematography that the Keys provide within the video. That turquoise water, the openness of the bridges, the road trip with the wind in your hair and that feel of just being out on the open road.” Kurt Busch

Not your average NASCAR video! Prepare to see high-speed racing action like never before in the latest Monster Energy NASCAR video starring Kurt Busch. Watch the 42-year-old NASCAR icon from Las Vegas, Nevada, in the brand-new “Shifting Gears” release, live now on Monster Energy’s YouTube channel. The video drop coincides with Busch’s return to the iconic Daytona 500 on February 14, twenty years after his debut as a young rookie.

The high-definition video was shot on location in Key West, Florida. At a run time of 9:18 minutes, the “Shifting Gears” video packs a potent blend of visual stimuli: Speed runs down coastal highways at 200 mph, flashbacks of Busch’s NASCAR career highlights, helicopter chases and cameos featuring certified icons from the realms of auto racing, Harley-Davidson stunt riding, and freestyle motocross.

Buckle up, because this one’s coming at you fast! On the eve of the 2021 Daytona 500 race, “Shifting Gears” released to global audiences and is available to view across Monster Energy’s social media channels. Viewers can now go online and watch the high-definition video on YouTube here.

“We wanted to really create the imagery and the cinematography that the Keys provide within the video. That turquoise water, the openness of the bridges, the road trip with the wind in your hair and that feel of just being out on the open road.” said Busch about the project, adding: “We wanted to feature motocross freestyle and the Harley guys. I do follow motorsports everywhere, and it is just a blast to blend in my world with them.”

The release of “Shifting Gears” is a personal milestone for Busch in his storied NASCAR career: The video drops exactly 20 years after Busch made his debut in the legendary 500-mile race as a promising young rookie in front of over 17 million viewers on national TV in 2001.

“It’s hard to believe that it’s been 20 years! You know, I still feel the same fire and desire. The willingness to do whatever it takes to win is there. And it comes with more experience now,” said Busch looking back at his NASCAR record.

Milestones of Busch’s NASCAR career also feature as visual flashbacks in the “Shifting Gears” video. Known as one of NASCAR’s most prominent ambassadors, Busch has built a NASCAR record that includes wins in all three of NASCAR’s top divisions: The Cup Series, the Xfinity Series, and the Camping World Truck Series. Plus, arguably the biggest win of his career at the Daytona 500 in 2017.

Asked about returning to the Daytona International Speedway in 2021, Busch said: “I feel honored, privileged and I am enjoying this opportunity this late in my career. It’s been four years since I won there, but all of it gives me that fuel and the desire to win it!”

For a look back at Busch’s career highlights – and some of the most cinematic NASCAR racing action ever caught on video – viewers can now go online and watch “Shifting Gears”, live on YouTube in full HD.

“I enjoyed making this video. This reflection through the Keys and driving and experiencing my Monster Energy NASCAR car out on the open road. That has never been done before and it took all of that teamwork. It took the trust and belief in everybody,” said Busch about the release of “Shifting Gears”.

See the results of all the hard work on YouTube and also make sure to read the background story behind the making of “Shifting Gears” on the Monster Energy website, featuring exclusive commentary from Busch himself.