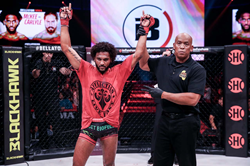 The hometown hero prevails! Monster Energy congratulates A.J. McKee on defeating Spike Carlyle at Bellator 286 in Long Beach, California, on Saturday night. In the co-main event fight contested in the Bellator promotion’s lightweight division, the 27-year-old from Long Beach went the distance over three rounds for a unanimous decision victory (29-26, 30-26, 30-27).

BELLATOR 286: Pitbull vs. Borics was showcased in front of an electrified audience at Long Beach Convention & Entertainment Center on October 1, 2022. The main card was broadcast live on Showtime, and the Monster Energy Prelims streamed live on YouTube.

Monster Energy’s A.J. “Mercenary” McKee (19-1) stepped into the Octagon ready to start a new chapter after suffering the first loss of his professional career against Patricio “Pitbull” Freire at Bellator 277 in April 2022. That defeat cost McKee the Bellator Featherweight World Champion title and ended the promotion’s longest victory streak – 18 wins – on record. Now competing at lightweight, McKee was focused on continuing his legacy.

McKee’s opponent at Bellator 286 was Spike “The Crucifixion” Carlyle (14-4) from San Diego, California, who came rolling into Long Beach on a five-fight victory streak, including four submissions and one knockout. In other words: McKee had his work cut out for him!

The fight started with explosive energy, as Carlyle sprinted into a flying knee kick – sidestepped by McKee – followed by a wild barrage of kicks and punches. As McKee returned fire, Carlyle landed a takedown, but the former 145-pound champion used his grappling expertise to shift the balance in his favor and win the round.

Carlyle felt the full force of McKee’s impeccable grappling as the hometown hero locked in an anaconda choke in Round 2, leaving his opponent scrambling for the bell. In the third and final round, McKee asserted his dominance with a textbook takedown early in the round before connecting a heavy elbow to the head that opened a cut above Carlyle’s right eye.

In the final moments of the epic battle, Carlyle was covered in his own blood while McKee almost locked in a guillotine choke. As the horn sounded, McKee controlled his opponent from the top and the two displayed good sportsmanship while awaiting the judge’s decision: McKee won his lightweight debut by unanimous decision (29-26, 30-26, 30-27).

“Ain’t nothing like a two-timer,” said Monster Energy’s McKee about competing in the upcoming Bellator Lightweight World Grand Prix and possibly winning another $1 million check.

McKee made his Bellator debut in 2015 and trains with expert coaching from his father, MMA icon Antonio McKee, who already mentored certified legends like Rampage Jackson and Chuck Liddell. He has built a milestone-heavy career: McKee holds the record for most consecutive wins in Bellator history at 18 victories. He has also achieved the most submission wins in Bellator featherweight history (six), and the most stoppages in the featherweight division at 13. At Bellator 263, McKee won the Bellator Featherweight World Championship and $1 million Grand Prix. He is now ready to make his mark in the promotion’s lightweight division. Stay tuned!

Earlier on Saturday night’s Bellator 286 main card, Monster Energy’s Juan “The Spaniard” Archuleta (26-4) was looking to get back on the winner’s bracket after two recent losses against Sergio Pettis at Bellator 258 and Raufeon Stots at Bellator 279. The former Bellator bantamweight champion was facing a formidable adversary in Enrique Barzola (18-7) from Peru, ready to recover from a loss against Magomed Magomedov at Bellator 282 in June.

From the opening bell, Archuleta brought the pressure to Barzola and dominated in terms of significant strikes. However, Barzola returned fire with painful elbow strikes during clinches against the fence and held his ground, but Archuleta dealt significant damage with an uppercut and heavy right hand in Round 1.

The second round continued the battle for dominance, but it was Archuleta who landed at least one significant takedown in each of the three rounds. The “Spaniard” also excelled in controlling the cage, leaving Barzola on the defense as the takedowns kept coming, and Archuleta connected a big right in the final round.

After three rounds of relentless battle, the judges pronounced Archuleta the winner by unanimous decision (30-27, 30-27, 30-27).

Speaking on fighting Barzola, Archuleta said in his post-fight interview: “We knew how durable he was. We knew how good he is. He beat Darrion Caldwell, who is a former world champion as well. I didn’t want him to make his name off me as well.” Stay tuned for more from Archuleta now that he’s back in the victory column.