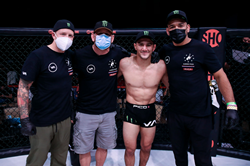 "I’m happy with it. The most important thing in this game, that I’ve found out, is to win. That’s what we did tonight." - Aaron Pico

Monster Energy congratulates Aaron Pico on defeating Justin Gonzales in the main card fight at Bellator 271 in Hollywood, Florida, on Friday night. In the featherweight division bout in front of a high-energy crowd, the 25-year-old from Whittier, California went the distance against his previously undefeated opponent to earn a unanimous decision victory after three rounds.

Also at Bellator 271, 23-year-old MMA phenomenon Valerie Loureda from Miami, Florida, returned to the winner’s circle after earning a split decision victory against Taylor Turner in the women’s flyweight bout on the night’s preliminary card.

Bellator 271: Cyborg vs. Kavanagh was contested inside Seminole Hard Rock Hotel and Casino in Hollywood, Florida in front of an enthusiastic live audience. The night featured a total of eleven fights across men’s and women’s divisions, including the headline Bellator featherweight championship fight between Cris Cyborg and Sinead Kavanagh. The Main Card was broadcast on Showtime and Prelims presented by Monster Energy streamed live on YouTube.

Monster Energy’s Pico (9-4) came to Seminole Hard Rock Hotel and Casino on a four-fight win streak. At Bellator 260 in June, the young fighter who trains at Jackson Wink MMA earned a third-round submission victory against Aiden Lee, marking his fourth consecutive finish. On Saturday night, Pico faced one of the hardest tests of his career in 30-year-old Justin Gonzales (12-1) from Greeley, Colorado, who stepped into the octagon on an undefeated career record.

In Round 1, the two fighters immediately collided striking, with Gonzales landing the first blow. But Pico returned fire with punishing body punches and scored a hook that rocked his opponent. At the end of the round, Pico took Gonzales to the mat for a dominant finish to the first five minutes.

This set the tone for Round 2, when it took Pico less than one minute to score another takedown on Gonzales. After controlling his opponent from the top for more than 90 seconds, Pico maintained the pressure on the feet, only to pin Gonzales again to the canvas, but could not lock in a submission before the bell.

The final round saw more overpowering wrestling from Pico, plus a thundering body kick that left Gonzales reeling. Pico’s dominant performance left no doubt about the outcome: He was pronounced the winner of the featherweight bout by unanimous decision (30-27, 30-27, 30-26).

“I’m happy with it. The most important thing in this game, that I’ve found out, is to win. That’s what we did tonight,” said Pico after his victory at Bellator 271. “I didn’t really think about anything else. I honestly felt in the zone tonight. I just didn’t think about anything other than being consistent.”

Friday night’s victory at Bellator 271 extends Pico’s winning streak to five. It also marks the very first decision win for the upstart, bringing his professional career record to nine wins in twelve fights. Pico’s other eight career wins were all finishes with two submissions and six knockouts. In his previous career as a wrestler, he ranked as a Cadet World Champion and two–time Junior World Championship medalist. Pico made his Bellator debut in 2017 and continues to evolve his versatile fighting style at Jackson Wink MMA Academy in Albuquerque, New Mexico.

What’s next for Pico? “I don’t have an answer to that question tonight. I’m going to go back home and assess with my coaches,” said Pico after the fight. “We’re on a five-fight winning streak. I think we’re in a really, really good position.”

Also on Friday night, Loureda (4-1) returned to the octagon in the women’s flyweight division bout on the preliminary card. After suffering her only career loss against Hannah Guy at Bellator 259 in May, the young MMA phenomenon from Miami was looking for a win. But it wouldn’t be easy.

In Taylor Turner (1-2), Loureda faced a tall adversary standing at 5-foot-10 with a superior reach at 71-inches. Then again, the fighter nicknamed “Master” for her impeccable taekwondo skills, did not become an MMA sensation only for her notorious victory dances.

Right from the opening bell, Loureda proved the faster and nimbler competitor. She also shut down any height or reach advantage with fast footwork. Circling Turner while keeping her distance, Loureda swooped in for targeted striking attacks, heavy body kicks and combos that did damage and scored points. She also defended against takedown attempts while keeping her opponent on her toes.

After going the distance until the end of Round 3, both fighters kept swinging ferociously throughout the final moments of the fight. When it was all said and done, Loureda earned the win via split decision (29-28, 28-29, 30-27) and proceeded to celebrate in signature style with a victory dance.

“You have no idea how much I’ve trained every day of my life,” said Loureda inside the octagon after her win at Bellator 271 on Friday night.

On the strength of Friday’s victory at Bellator 271, Loureda now has four professional wins to her name. The decorated taekwondo competitor who trains at American Top Team first made her Bellator debut back in 2019. She immediately caught attention with two-consecutive knockout victories, enhanced by her vibrant personality and empowering message to attract more women into martial arts.