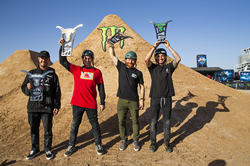 Way to start the 2021 BMX season! Monster Energy congratulates team rider Andy Buckworth on his victory at the Monster Energy BMX Triple Challenge Dirt competition in Houston, Texas, this Saturday. In an elite field of international BMX talent, the 30-year-old from Lake Haven, Australia, clinched the win with a dominant performance in the final. Joining him on the podium, 27-year-old Monster team rider Pat Casey from Placentia, California, earned a strong second-place finish on the dirt track outside NRG Stadium.

In the highly contested Best Trick competition, Monster Energy team rider Larry Edgar from Corona, California, put down the most creative move of the weekend to take the win.

Now in its fifth year, the Monster Energy BMX Triple Challenge competition series takes place during select Monster Energy Supercross events. Previously contested as a triple challenge, this year’s schedule has been limited to two contests due to the adversities of the coronavirus pandemic. As always, BMX Dirt is dedicated to showcasing the progression in freestyle BMX. The contests continue to attract the best riders in the world as well as up-and-comers who are looking to make a name for themselves.

This weekend’s BMX Dirt event in Houston happened amid social distancing measures and with full safety protocols in place against the spread of Covid-19. The center of the BMX action was an outdoor track starting on a big portable roll-in, followed by two giant sets of dirt jumps for big air, as well as a quarter pipe at the end.

The field of riders was streamlined to only 16 contestants, including international elite riders and Olympics competitors. After the long hiatus on the BMX competition schedule in 2020, riders were bustling with energy and enthusiasm to finally be able throw down some tricks and chase some prize money while maintaining a safe distance. The competition format was ‘straight to finals’, consisting of four runs with the best score counting. For a unique twist, additional points from Best Trick factored into the riders’ overall scores as well.

Friday’s practice had to be moved to the night hours as 30-mile-per-hour winds gusted over the arena during the daytime. Despite the wind and cold, Monster Energy’s Edgar was out under the spotlights in the epic night session, working the course with creative transfers and tricks. Edgar carried his high-energy approach into Saturday’s contest with a 360 backward over the second jump—going from the landing into the lip—and then topping it off with a flair on the landing of the first jump. It was a wild show! To no surprise, Edgar took home the coveted Best Trick trophy at BMX Dirt in Houston.

Claiming the top spot in the main event in Houston this weekend Buckworth is no stranger to podium finishes.
With some of the hardest tricks in the business and despite the lack of contests as of late, the Australian rider proved that his skills had not rusted despite the long break. He got in the zone and rolled in fully committed for the no-handed double back flip straight into a superman front flip on the second jump. His incredible display of bike riding throughout the day earned Buckworth the bullhorn-style trophy, and he also came close to landing a decade 720 during the Best Trick competition.

Casey always looks extremely comfortable on big jumps – and BMX Dirt in Houston was no exception. Always going super high and nailing technical tricks, Casey sent a combo he once reserved for Best Trick over the second set with the tailwhip cash roll. Together with huge 360 double downside whips, and a collection of stylish combos earned Casey a strong second place on the Houston podium this Saturday.