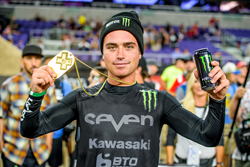 All these riders are so gnarly! It was tough to not be able to do this event last time and have to wait an entire year, but all the hard work paid off - Axell Hodges

The motocross action was off the charts tonight at X Games Minneapolis 2018, the world’s premier action sports event supported by Monster Energy as the official drink sponsor for the fifth consecutive year. The capacity crowd at U.S. Bank Stadium was on its feet as an international field of elite motocross athletes battled for X Games medals in two disciplines.

Now in its second year in the Twin Cities, X Games Minneapolis brings motocross to an indoor setting at U.S. Bank Stadium. This eliminates distractions such as heavy wind and rain that impacted athletes at previous events and lets them focus on the world-class stunts X Games is known for.

After missing last year’s event due to an injury, Hodges went big right out the gate: Blasting a huge air on his first attempt – launching out the quarter pipe in a straight arch, landing low and compressed on the bank – netted Hodges an early lead at 32’ 3”. In his next attempt, tonight’s youngest High Air competitor pushed his lead to 33’ 2”, only to seal the deal on round three with a monstrous 34’ 3” aerial for the win.

“All these riders are so gnarly! It was tough to not be able to do this event last time and have to wait an entire year, but all the hard work paid off,” said Hodges upon winning gold.

When the action moved into Moto X Freestyle (FMX), the field of eight riders cranked up the difficulty level right from the start with double backflips and highly technical moves across the board. Monster Energy’s Strong came into the Freestyle competition with a personal score to settle: Although a three-time X Games gold medalist and winner of last year’s Best Trick silver medal, “Jacko” had never finished a Moto X Freestyle run without crashing – until tonight.

On his first of two 75-second runs, Strong put together a perfect routine using every angle of the course. Moves like a Hart Attack flip, highly technical frontflip and double backflip over the big gap, Rock Solid flip, and a spectacular one-handed frontflip earned the 27-year-old 90.00 points and an early lead.

Strong looked like a shoe-in for the top spot, but had to abandon his second run due to goggle problems and was bumped by France’s Tom Pages into second place.

Also putting on a spectacular show in Minneapolis tonight, his teammate and fellow Australian Harry Bink dislocated his shoulder while putting together a strong first run, but still came back to nail a perfect routine on run two: Standouts like Rock Solid flip, Hart Attack flip, heel clicker flip and one-handed double backflip netted the 24-year-old an 86.66-point score and fifth place. Rounding out a strong showing, his teammate and three-time FMX gold medalist Taka Higashino landed back-to-back technical variations such as Cordova flip, Dead Body flip, Kiss of Death flip, and a massive Cali Roll for 86.33 points and a sixth place finish.

Make sure to tune in on Saturday when Harry Bink, Strong, Josh Sheehan and Taka Higashino return for the Monster Energy Moto X Best Trick Final.

Don’t miss out on what’s happening next in the Twin Cities. Score all the exclusive updates from X Games Minneapolis 2018 including photos and contest results as they happen visit http://www.monsterenergy.com. Follow Monster Energy on YouTube, Facebook, Instagram & Twitter and watch the official Monster Energy hashtag #unleashedatx on social media.