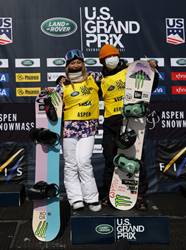 “It feels really good. I think qualifying for the Olympics is always a really nerve-racking situation to be in, so I'm really happy right now." - Chloe Kim

An epic weekend of snowboarding is officially a wrap! Monster Energy athletes dominated the final day of competitions at the 2021 Land Rover U.S. Grand Prix in Aspen, Colorado. In the Women’s Snowboard Halfpipe final on Sunday, 20-year-old snowboard phenom Chloe Kim from Long Beach, California, secured her victory with a flawless first run.

In the Men’s Snowboard Halfpipe final, 19-year-old Yuto Totsuka from Yokohama, Japan, clinched the victory with a five-point lead on the next competitor. The victory marks Totsuka’s third consecutive first-place finish in the high-profile snowboard event.

The 2021 Land Rover U.S. Grand Prix once again saw the world’s best winter sports athletes competing for FIS World Cup points in snowboard and freeski slopestyle and halfpipe competitions. Over the course of two days, the event celebrated its 25th anniversary and served as the first Olympic tryout event for the Beijing 2022 Olympic Winter Games.

With a new home in Aspen Snowmass, the 2021 Land Rover U.S. Grand Prix was contested amid stringent Covid-19 safety measures and closed to the public. Without spectators on Buttermilk Mountain, live coverage of the weekend’s competitions was broadcast on international TV networks and streamed on the Peacock Premium platform.

In the Women’s Snowboard Halfpipe final on Sunday, the field of eight riders included snowboarders from Canada, Japan, Spain, and the United States. But within this elite roster, all eyes were on one story: The return to U.S. Grand Prix competition of 20-year-old Kim. After missing last year’s event on Mammoth Mountain for her freshman year at Princeton University, the Queen of the Superpipe was back to her dominant form.

Stepping to the 22-foot-high halfpipe on Buttermilk Mountain as the freshly minted FIS Snowboard Halfpipe World Champion, Kim sealed the win on her first run of the final. Dropping in at full speed, the Olympic gold medalist kicked off her run by posting a tall backside 360 Indy on the first wall, right into a high-flying switch backside method air, followed by a switch frontside 900 stalefish, switch backside 360 frontside grab, and her signature McTwist Indy grab on the last wall.

Kim secured her U.S. Grand Prix victory with a 90.50-point score that held until the end, a total 4.50 points ahead of Spain's Queralt Castellet in second place.

“It feels really good. I think qualifying for the Olympics is always a really nerve-racking situation to be in, so I'm really happy right now,” said Kim upon winning the Women’s Snowboard Halfpipe event, adding: “I went into the season with no expectations. Just wanted to come out and land a run, and I’m very surprised on how this season went. It went a lot better than I thought it would, so I’m just really stoked!”

Kim’s2021 season started with a first-place finish at the FIS World Cup LAAX Open in Switzerland, followed by Superpipe gold at X Games Aspen 2021, and claiming the FIS Snowboard Halfpipe World Championship title less than one week ago. Kim’s career is without parallel in snow sports: The Team USA winter sports athlete won her first U.S. Open halfpipe title in 2016 at age 15 and earned gold at the 2018 PyeongChang Winter Olympics. Kim was the 2019 ESPY winner for Best Female Action Sports Athlete and listed among the ‘Most Influential People of 2018’ by TIME Magazine.

A big weekend of snowboard action concluded with the Men’s Snowboard Halfpipe final amid perfect conditions. In the ten-rider final on the 22-foot-tall snow halfpipe on Buttermilk Mountain, all eyes were on last year’s winner: Totsuka who came to Aspen on a spectacular winning streak.

Only a few days before, Totsuka had made history by claiming the 2021 FIS Snowboard Halfpipe World Championship title from Australia’s Scotty James. And with Team USA’s Shaun White absent from the Grand Prix final, Totsuka emerged as the man to beat on Sunday.

Totsuka claimed the victory with a top score of 91.75 points, a whopping 5.00 points ahead of the next competitor, fellow Japanese athlete Raibu Katayama in second place.

With yet another first-place finish under his belt, Totsuka is officially having the best season of his career. His 2021 run started with back-to-back halfpipe victories at Laax Open and X Games Aspen in January, followed by a career-first FIS Men’s Snowboard Halfpipe World Championship title win.