The Queen is back! Monster Energy congratulates Chloe Kim on her dominant victory in Women’s Snowboard SuperPipe at X Games Aspen 2021 on Saturday night. 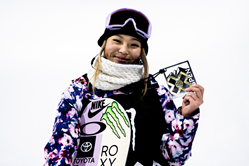 “I really was not expecting to get on the podium. I just wanted to go into the season with a new mindset and just have fun. And try out new runs, which I was really happy to do today. I’m so grateful to be here. I’m really happy and all the girls killed it." Chloe Kim

The Queen is back! Monster Energy congratulates Chloe Kim on her dominant victory in Women’s Snowboard SuperPipe at X Games Aspen 2021 on Saturday night. At the world’s biggest snow sports spectacle in the heart of the Rocky Mountains, the 20-year-old snowboard phenom from Torrance, California, returned to competition after a one-year hiatus and claimed her sixth career X Games gold medal.

The 20th consecutive X Games in Aspen is here to stoke fans with premium action sports from Friday to Sunday at Buttermilk Mountain in Aspen Snowmass. Supported by Monster Energy as the official energy drink partner of X Games, the three-day spectacle features the biggest names in action sports competing in Big Air, Slopestyle, SuperPipe and Knuckle Huck disciplines. As the pinnacle of winter action sports, X Games Aspen 2021 brings together more than 80 elite skiers and snowboarders from 16 countries in 14 medal events.

In response to the ongoing COVID-19 pandemic, X Games Aspen 2021 is closed to the public without the usual spectators and musical performances on site. Nevertheless, the latest progression and evolution of winter action sports are broadcast live to millions of viewers across the globe.

The towering halfpipe at over 22 feet in height and 600 feet in length provided the perfect backdrop for a spectacular air show. In the 30-minute jam session, winners were determined based on their single best run, thereby keeping the contest open until the last second and leaving room for experimentation.

The story of the night was Kim’s highly anticipated return to X Games Aspen after missing last year’s contest to pursue her studies at Princeton University. Could the ‘Queen of the Superpipe’ continue right where she left off with back-to-back Snowboard SuperPipe wins at X Games Aspen 2018 and 2019? With a pack of competitors hungry for gold in the mix, the pressure was high.

Straight out the gate, Kim charged into the SuperPipe with the biggest method air of the night but went down hard on a 1080 tailgrab on the second wall. With her first run as a throwaway, Kim had to regroup while announcing on her Instagram story that she had ‘popped’ a few ribs out of place on impact.

With American pro snowboarder Maddie Mastro in first place, Kim showed her calm under pressure on her second attempt: She opened her run by blasting a huge method air at 13'7" altitude, then combined a frontside 1080 tailgrab, switch 720 Weddle, frontside 900 tailgrab and a classic McTwist on the last wall into a perfect routine that sent her to the top of the leaderboard.

As Maddie Mastro tried to fire back by pulling her signature double crippler aerial, Kim displayed her versatile arsenal of tricks by switching up her moves on Run 3: Starting with a 360 Indy air on the first wall, Kim launched a huge switch method, switch 720 Weddle, frontside tailgrab 1080 and slowly-rotated McTwist to seal her victory at X Games Aspen 2021.

“I really was not expecting to get on the podium. I really just wanted to go into the season with a new mindset and just have fun. And try out new runs, which I was really happy to do today. I’m so grateful to be here. I’m really happy and all the girls killed it,” said Kim upon taking Women’s Snowboard SuperPipe gold on Saturday night.

Saturday’s victory marks Kim’s sixth X Games gold medal and brings her total to eight medals (6 gold, 1 silver, 1 bronze). The Team USA winter sports athlete is podium-perfect and has claimed medals at every single X Games she has entered since her debut at X Games Aspen 2014. She won her first U.S. Open halfpipe title in 2016 at age 15 and earned gold at the 2018 Winter Olympics. Kim was listed among the ‘Most Influential People of 2018’ by TIME Magazine and was the 2019 ESPY winner for Best Female Action Sports Athlete. Kim recently featured as the jellyfish on ABC’s The Masked Singer and took first place at the FIS World Cup LAAX Open in Switzerland last weekend.

Stay tuned as 13.5 hours of competitions will be broadcast live on ESPN, ESPN2 and ABC, supplemented by live coverage and behind-the-scenes content across digital X Games properties. Also catch the action on ESPN’s online streaming services, with select disciplines available on X Games YouTube, Facebook, TikTok, and Twitter, as well as the ESPN App. In addition to all of the content on ESPN’s U.S.-based media platforms, X Games Aspen 2021 will be televised globally in 192 countries and territories to more than 500 million homes.

A new virtual experience, X Fest, is bringing the excitement of X Games Aspen to fans at home for a chance to win prizes, play games, and connect with X Games sponsors. Fans can customize their avatars and interact with curated Monster Energy video content in the igloo-themed Chill Media Zone at XGames.com/xfest.