Way to make a comeback! Monster Energy congratulates Chris “The All American” Weidman on his hard-earned victory against Omari Akhmedov at UFC Vegas 6 in Las Vegas on Saturday night. 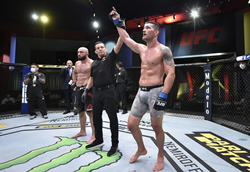 “I’m back, man. I’m back at 185! It feels good. I feel like I’m restarting my career, and I’m really grateful to have that opportunity. I feel refreshed and renewed. I’m super excited about the future.” Chris Weidman

Way to make a comeback! Monster Energy congratulates Chris “The All American” Weidman on his hard-earned victory against Omari Akhmedov at UFC Vegas 6 in Las Vegas on Saturday night. In the co-main event fight inside the UFC Apex facility, the 36-year-old mixed martial arts icon from Baldwin, New York, went the distance in a grueling middleweight division match to clinch the win by unanimous decision after round three.

Saturday’s edition of UFC Fight Night was contested as a closed-to-the-public event in the safe environment of the UFC Apex facility in Las Vegas and broadcast live on ESPN+. The event happened amid enhanced safety protocols to curb the spread of coronavirus (COVID-19), including pre-fight quarantine and extensive testing for fighters and personnel.

Monster Energy’s Weidman (15-5-0) came to Las Vegas in need of a win. The former UFC middleweight champion had sustained KO losses in five of his past six fights. Adding to the challenge, his opponent Akhmedov (20-5-1) stepped into the Octagon on a six-fight unbeaten streak.

From the start, Weidman pursued Akhmedov looking for a takedown, but the Dagestani fought off his initial attempts. After landing a series of heavy leg kicks, the decorated All-American collegiate wrestler finally pinned his opponent to the canvas, ending the opening round on heavy ground-and-pound.

The second round proved a test of willpower as Akhmedov responded with a flurry of punches and aggressive takedown attempts. Weidman capitalized on his wrestling skills to defuse Akhmedov’s offense but ended up receiving punishing body shots. Weidman finally asserted his dominance in round three, controlling his opponent on the ground and nearly forcing a submission via arm triangle. After the final buzzer, the judges declared Weidman the winner of the tough fight by unanimous decision (29-27, 29-27 and 29-28).

“I’m back, man. I’m back at 185!” said Weidman upon winning the co-main event fight at UFC Vegas 6. “It feels good. I feel like I’m restarting my career, and I’m really grateful to have that opportunity. I feel refreshed and renewed. I’m super excited about the future.”

Saturday’s victory against Akhmedov marks Weidman’s first win in three years. It brings the MMA icon back in the winner’s circle after consecutive losses against Dominick Reyes (2019) and Ronaldo Souza (2018).

So, what’s next Weidman? With his name back in the win column, Weidman is building momentum towards bigger fights. “The top-tier guys, I’m coming for you. I know this wasn’t the most outstanding win, but it’s me on the right page and that’s a problem for everybody,” said Weidman in Saturday’s post-fight interview.

While MMA journalists say it’s too early for Weidman to land a shot at reclaiming the middleweight title, experts predict a bout with current #7 middleweight Derek Brunson in the future. Until then, make sure to tune in next weekend when Monster Energy’s Daniel Cormier challenges Stipe Miocic for the UFC heavyweight title at UFC 252 on August 15.