Way to end the season! Monster Energy congratulates its team of freeski and snowboard athletes on a strong performance at the FIS Snowboard and Freeski World Cup finals in Slopestyle in Silvaplana, Switzerland, this weekend. 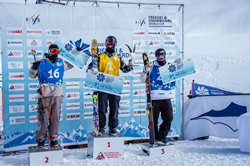 “Craziest run of my life right there. To come out on top and come away with the globes is a dream come true. Always wanted to do that since I was a little kid, so here we are!” Colby Stevenson

Way to end the season! Monster Energy congratulates its team of freeski and snowboard athletes on a strong performance at the FIS Snowboard and Freeski World Cup finals in Slopestyle in Silvaplana, Switzerland, this weekend. In the final event of the 2020/21 FIS season held, Monster team riders claimed medals in key events at Corvatsch Park resort in the Engadin region.

When the action shifted to snowboarding on Sunday, Monster Energy’s Kokomo Murase once again proved a podium threat against the world’s best riders. When all was said and done, the 16-year-old prodigy from Gifu, Japan, took home the silver medal.

The 2021 FIS Snowboard and Freeski World Cup finals brought the world’s best athletes across both sports to the Swiss mountainside from March 26-28, 2021. The stakes were high: Aside from the prestigious Crystal Globe trophies for the season’s top riders, the contest also awarded FIS Freestyle Nations Cup trophies for the best country across all the seven Freestyle and Freeski events of the 2020/21 season.

Due to the ongoing coronavirus pandemic, the event was contested without spectators and amid stringent safety measures. Host and organizer Corvatsch AG together with the Swiss Ski organization implemented a comprehensive Covid-19 protection concept, while the action was broadcast live on international networks including the Olympic Channel. Here’s how the action unfolded in Silvaplana this weekend:

The World Cup finals got underway on Saturday amid slight weather delays and overcast skies with the Men’s Freeski Slopestyle. Sixteen of the world's best freeskiers – including riders from Norway, Sweden, Canada, the United Kingdom, and the United States – took on the downhill obstacle course looking for the highest-scoring run.

The course design provided plenty of options for creative tricks and transfers. Instead of the conventional line-up of rail obstacles at the top followed by jump obstacles at the bottom, the Silvaplana course challenged riders by presenting a mix of tall jumps interspersed with rails along the way.

Monster Energy’s Colby Stevenson came to Silvaplana fresh off a win at the Land Rover U.S. Grand Prix in Aspen the previous weekend. The 23-year-old from Park City, Utah, also ranked at the top of the FIS leaderboards as the man to beat for the coveted Crystal Globe trophies in Freeski and overall rankings.

Stevenson faced heavy competition in the finals, especially from a strong Norwegian contingent including Monster rider Ferdinand Dahl. But right from the start, Stevenson made it clear that he wasn’t leaving without the win. On his first run, he dialed in a perfect routine spiked with technical control on the rails and stylish aerials for a dominant lead at 94.25 points.

In Run 2 of the final, Stevenson turned up the heat even more. On the first rail, he finessed a switch rightside 270 backslide to continuing 270 off, followed by a rightside 720 mute on the quarter pipe, and a switch left 270 backslide continuing 450 out on the next rail. On the big jumps, Stevenson blasted a switch rightside double cork 1440 safety, switch left double 1620 Cuban, and left double 1440 Japan to opposite Japan. Saving a banger for last, he hit the final launch rail with a railslide to left 810 tail grab out for 96.75 points and the win.

“Craziest run of my life right there,” said Monster Energy’s Stevenson upon winning with a perfect routine at the FIS World Cup finals in Silvaplana, adding: “To come out on top and come away with the globes is a dream come true. Always wanted to do that since I was a little kid, so here we are!”

Finishing the season with 245 points, Stevenson now owns double Crystal Globe trophies as the top-ranked Slopestyle and overall Freeski rider on the 2021 FIS World Cup leaderboards. The young upstart first became a household name at X Games Aspen 2020 when he made history as the first-ever rookie to win the Ski Slopestyle competition. He also took X Games gold that year in Ski Knuckle Huck. Stevenson is a 2015 graduate of the Winter Sports School in Park City and represents the United States as a U.S. Ski Team member.

Also earning a podium spot, 22-year-old Dahl brought the right bag of tricks for the challenging course. After his first run was a throwaway score, Dahl set the record straight on Run 2 of the final: He started his line with a switch left lipslide 270 continuing 270, right cork 720 reverse mute on the quarter pipe, switch right 270 continuing 450 out. He hit the jumps by ways of switch left double 1260 mute, right double bio 1260 Japan, and switch right double bio 1260 mute, before hitting the final launch rail with a right bio frontside 810 out for 93.00 points and second place.

On the strength of 172 total points, Dahl finished his season in second place in the Slopestyle World Cup rankings, and second place on the Freeski overall standings.

Dahl started his year on a strong note by taking Men’s Ski Slopestyle Silver at X Games Aspen 2021 in January, his second X Games medal. The young Norwegian rider barged onto the scene as a talented teen putting down a standout 2017/2018 season claiming triple podiums at World Cup events across France, Switzerland, and the United States. Known for his skate-inspired style, Dahl closed out the 2020 season with a third-place finish in Slopestyle at the Stubai FIS World Cup in November.

In the highly anticipated Women’s Freeski Slopestyle event, Swiss team rider Sarah Hoefflin took on the world elite on her home soil in Silvaplana. Although entering as the oldest rider on the list at 30 years of age, the Olympic gold medalist once again put her advanced trick selection and style on full display.

On Run 2 of the final, Hoefflin started by posting switch left lipslide 270 out, left alley-oop, and right frontside 450 out on the rail. She then landed back-to-back right 540 mute, switch right 720 mute, switch 540 safety, and left 360 safety grab for 86.50 points and second place behind Tess Ledeux from France in first.

In the overall FIS season rankings, Hoefflin finished in podium position with 119 slopestyle points and 151 total points. This concludes her FIS World Cup season in third place overall in Slopestyle list, as well as third on the Freeski overall podium.

Hoefflin came into professional skiing relatively late in her career after earning her neuroscience degree in 2013. But the Swiss native has since built an impressive competitive record: Hoefflin shook up the freeski elite by winning Women’s Ski Big Air at Aspen 2018 and that same year claimed the gold medal in slopestyle at the Winter Olympics in Pyeongchang, South Korea. Her segment in the Faction Ski Team movie ‘The Collective’, earned the Best Female Edit trophy at the Newschoolers Skier of the Year Awards.

Sunday’s Snowboard Slopestyle finals marked a historic occasion: After hosting freeski competitions for more than a decade, this was the first time for Corvatsch Park to host a world-class snowboard competition. Rising to the challenge, the world’s best snowboarders were ready to take on the pristine course overlooking the stunning mountain vistas of the Engadin region.

Monster Energy’s Kokomo Murase came to Silvaplana hungry for a medal after finishing closely outside the podium on recent starts including the 2021 FIS Snowboard World Championships in Aspen two weeks ago. Holding her own against the world elite of freestyle snowboarding, the 16-year-old snowboard prodigy returned to full form on the demanding course.

The course featured a quick rail section at the top, followed by a large quarter pipe on the left side, into another rail section, three huge kickers, and finally one more launch rail to finish at the bottom. Overall, the course favored aerial skills, which Murase has in droves.

In her first run, Murase put down lipslide 270 off first rail, backside method air on the quarterpipe, 270 on to 270 off the second rail, and a huge Cab 540. Kokomo then pulled a perfect frontside 720 melon grab, backside double 1080 Weddle, and a huge Crippler over the hip for 88.75 points and second place. She also threw in a huge Cab double 900 on her second run.

Murase started her FIS season with a second-place finish in Big Air at the at the FIS Snowboard World Cup season opener in Kreischberg, Austria. The young snowboard phenom was named ‘Snowboarder of the Year’ at the 2019 Japan Action Sports Awards. She made history at X Games Norway 2018 as the first girl to land a 1260 double cork in competition and also became the youngest Winter X Games athlete ever to win a gold medal at age 13. Known for pushing the boundaries of freestyle snowboarding, Murase owns five X Games medals (1 gold, 3 silver, 1 bronze) across Slopestyle and Big Air disciplines.