Monster Energy congratulates freeski athlete Colby Stevenson on claiming the silver medal in Men’s Freeski Slopestyle at the 2021 FIS Freeski World Championships in Aspen. In Saturday’s final on Buttermilk Mountain in Aspen Snowmass, the 23-year-old from Park City, Utah, took the podium spot in an elite field of international athletes. 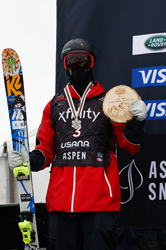 “Any day I come out and land a run, that’s a win for me. Really stoked to come out and stomp a run." - Colby Stevenson

Monster Energy congratulates freeski athlete Colby Stevenson on claiming the silver medal in Men’s Freeski Slopestyle at the 2021 FIS Freeski World Championships in Aspen. In Saturday’s final on Buttermilk Mountain in Aspen Snowmass, the 23-year-old from Park City, Utah, took the podium spot in an elite field of international athletes.

Contested in a closed-to-the-public format amid stringent Covid-19 safety measures, the high-profile event included slopestyle, halfpipe, as well as the second annual Visa Big Air presented by Land Rover. With no spectators allowed on Buttermilk Mountain, live coverage was broadcast on NBC and the Olympic Channel, supplemented by streaming on Peacock.

The weather and course conditions were ideal for the Men’s Freeski Slopestyle final on Saturday. The field of twelve riders took on the challenging downhill course on Buttermilk Mountain in a three-runs final. Winners were decided on best single run scores.

In a true test of aerial skills and technical talent, the course offered a rail section with three hits, plus a jump section featuring gaps between 55 to 65 feet long. Adding to the challenge, the weather turned from blue skies to gusty winds during the final session.

In his second World Championship start, Monster Energy’s Stevenson proved that he had the tricks and consistency to claim a podium spot against the sport’s world elite. In Run 2 of the final, Stevenson hit the rails with technique and finesse, landing a nose-butter left 450 pretzel 270, switch left 270 backslide continuing 270 out, and a right 270 continuing 630. Attacking the rail section with speed, Stevenson pulled a switch left double 1440 Japan, switch right double 1260 safety, and left double cork 1620 Cuban for the lead at 89.55 points.

Stevenson held the top position until Run 3, when Switzerland's Andi Ragettli edged into first place with a 90.65-points score.

“Any day I come out and land a run, that’s a win for me. There is a lot more pressure when there are elements involved other than the run ahead of you — you’ve got the wind, maybe snow coming in, and flat light. Definitely a lot of added pressure. Really stoked to come out and stomp a run,” said Stevenson upon claiming silver at the 2021 FIS Snowboard World Championships on Saturday.

Stevenson barged onto the professional scene at X Games Aspen 2020 by making history as the first-ever rookie to win the Ski Slopestyle competition. He also took X Games gold that year in Ski Knuckle Huck and silver at the Land Rover U.S. Grand Prix at Mammoth Mountain. The 22-year-old is a 2015 graduate of the Winter Sports School in Park City and U.S. Ski Team member.

Defending 2019 Men’s Freeski Slopestyle World Champion and Monster Energy team rider James Woods came close to a podium finish on Saturday. The 29-year-old from Sheffield, United Kingdom, held on to third place for the majority of the final after posting a perfect run for 84.76 points. But on last runs, Woods was bumped off the podium by Team USA’s Alexander Hall taking bronze.

On Tuesday, the Men’s Freeski Visa Big Air presented by Land Rover had to be contested without reigning Big Air crystal globe winner and two-time X Games big air champion Birk Ruud. The 20-year-old Monster Energy team rider from Oslo, Norway, had qualified into the final in first place during Monday’s qualifier session. But the Norwegian team announced that Ruud would miss Tuesday’s finals to be with his ailing father and the rest of his family in Norway.

A strong contender for the title, Ruud emerged as the top qualifier on the strength of a left double bio 1800 Weddle grab for a 96.00-points score. In January, Ruud earned gold in the Freeski Big Air Men’s event at the FIS World Cup season opener in Kreischberg, Austria.