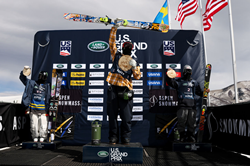 “To get the win and get one step closer to the Olympics, which obviously is one of my goals, is amazing. So, I am stoked." - Colby Stevenson

Monster Energy congratulates freeski athlete Colby Stevenson on his dominant first-place finish at the 2021 Land Rover U.S. Grand Prix in Aspen, Colorado. Facing the world elite of freestyle skiing on Buttermilk Mountain in Aspen Snowmass, the 23-year-old from Park City, Utah, took the victory with a perfect run in Saturday’s final. He was joined on the podium by 29-year-old freeski icon Henrik Harlaut from Åre, Sweden, who finished in third place.

Over the course of two days, the 2021 Land Rover U.S. Grand Prix saw the world’s best winter sports athletes competing for FIS World Cup points in snowboard and freeski slopestyle and halfpipe competitions. The annual event celebrated its 25th anniversary this weekend and served as the first Olympic tryout event for the Beijing 2022 Olympic Winter Games.

With a new home in Aspen Snowmass, the 2021 Land Rover U.S. Grand Prix was contested amid stringent Covid-19 safety measures and closed to the public. In the absence of spectators on Buttermilk Mountain, live coverage of the weekend’s competitions was broadcast on international TV networks and streamed on the Peacock Premium platform.

In the Men’s Freeski Slopestyle final on Saturday, ten riders from four countries took on the challenging downhill course amid sunshine and spring conditions. Designed as a true test of aerial skills and rail technique, the course featured a rail section with three hits, plus a jump section featuring gaps between 55 to 65 feet long.

Monster Energy’s Stevenson came into the U.S. Grand Prix fresh off a Slopestyle silver medal at last weekend’s 2021 FIS Freeski World Championships. Straight out the gate, the Team USA member took the lead by stomping a perfect run for 89.58 points. But he saved some extra bangers for final attempts.

In his third run, Stevenson finessed the rail section with some of the highest-scoring jib trucks of the day, including left nose butter 450 on to pretzel 270 out on the first rail, followed by switch left 270 front slide safety grab to 270 out, and a right 270 on to continuing 630 out on the cannon rail. Blasting into the jump section at full speed, Stevenson posted a switch left double cork 1440 stalefish, switch right double 1260 safety, and hit the final jump with a left double 1620 Cuban almost all the way to flat for 91.40 points to claim first place.

“To get the win and get one step closer to the Olympics, which obviously is one of my goals, is amazing. So, I am stoked,” said Stevenson upon claiming first place at the 2021 Land Rover U.S. Grand Prix on Saturday, adding: “Been dealing with a lot of snow and a lot of wind in other events but today couldn’t be better. I landed a run, that’s the biggest thing, and I took the win.”

Saturday’s first place finish puts Stevenson at the top of the FIS World Cup leaderboards. It’s been exactly four years since Colby Stevenson’s last World Cup win at Seiser Alm, Italy. At the time, the rookie returned to competition after a serious car accident that nearly ended his skiing career. The young upstart became a household name at X Games Aspen 2020 when he made history as the first-ever rookie to win the Ski Slopestyle competition. He also took X Games gold that year in Ski Knuckle Huck. Stevenson is a 2015 graduate of the Winter Sports School in Park City and represents the United States as a U.S. Ski Team member.

Also making the podium in Saturday’s final, 29-year-old freeski innovator and Monster Energy rider Harlaut from Åre, Sweden, brought his deep bag of tricks to the stacked downhill course. Harlaut put down technical trickery in the rails section, including nollie left 450 on to continuing 270 out, right 270 on to continuing 270 out, switch left 270 pretzel on K-fed. He then attacked the jump section by ways of right double 1260 mute and switch left double 1260 safety grab.

Saving the best for last, Harlaut sent a left double bio 1620 safety across the final jump, an aerial he unveiled for the first time in Big Air competition at X Games Aspen, to bring his overall score to 84.46 points for third place.

Saturday’s third place marks the first World Cup podium in two years for Harlaut. The innovative skier is recognized as one of the trailblazers of freestyle skiing’s progression. He ranks as the most medal-winning ski athlete in X Games history with thirteen medals to his name (8 gold, 5 silver). His most recent win was a gold medal in Ski Knuckle Huck at X Games Aspen 2021 in January.

The Monster Energy team also claimed a podium spot in the Women’s Freeski Halfpipe final on Sunday. The legendary Superpipe at Aspen Snowmass, boasting 22-feet-high walls at a length of 600 feet, served as the canvas for the world’s best halfpipe skiers. In the eight-rider final, skiers from Canada, China, Japan, Russia, the United Kingdom and the United States were looking to post the best scores in a total of three runs.

No stranger to high-pressure final sessions, 31-year-old Sigourney from Carmel, California, once again proved why she is an Olympics bronze medalist. On her third and last run of the day, the seasoned halfpipe rider put down a flawless routine featuring left tailgrab 900, alley-oop 360 Weddle, leftside 720 Weddle to fakie, switch alley-oop 360, left 540 tailgrab, and a rightside 720 on the final wall. A high score of 89.00 points earned Sigourney third place with Canada’s Rachael Karker in first.

Known for her high halfpipe aerials and innovative trick selection, Sigourney made history as the first woman to land a 1080 in halfpipe competition in 2012. She represented the United States in the 2018 PyeongChang 2018 Olympics and owns four X Games medals (2 silver, 2 bronze). Before the Covid-19 pandemic disrupted competition schedules, Sigourney earned halfpipe bronze in the 2019 FIS World Championship.