Monster Energy congratulates Donald “Cowboy” Cerrone on his win against Al Iaquinta at UFC 151 in the Canadian Tire Centre in Ottawa, Canada. 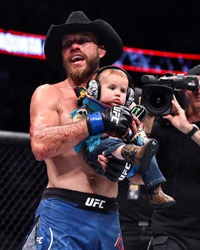 I would love my next fight to be for a title, but if Conor comes in, let’s go - Donald Cerrone

Monster Energy congratulates Donald “Cowboy” Cerrone on his win against Al Iaquinta at UFC 151 in the Canadian Tire Centre in Ottawa, Canada. In front of over 10,000 live spectators and viewers on ESPN+ 9, the 36-year-old UFC icon from Denver, Colorado emerged victorious from the night’s main event via unanimous decision.

As the only Monster Energy fighter on the card in Ottowa, Cerrone added to his record of the most career wins in UFC history (36-11) and has been on a tear since returning to the lightweight division earlier this year.

The first round saw Cerrone work his opponent with fierce leg kicks to the body, while Iaquinta kept looking for openings to land punches and score a takedown. The pressure increased in round two as Cerrone kept drawing on his Muay Thai background to punish Iaquinta with heavy body and thigh kicks, but also ended up on the receiving end of a few hard right hands from “Raging” Al.

In round three, Cerrone kept chipping away at his opponent by landing hard kicks followed by quick jabs to the face. The round escalated after Cerrone landed a heavy head kick before taking Iaquinta down with a straight left and working him with ground and pound before the bell.

Cerrone dropped Iaquinta again with a head kick in the beginning of the fourth round, but the New Yorker was able to defend and even land several left hooks. Cerrone proceeded to pound him with precise kicks and a brilliant punch combo that left Iaquinta visibly bleeding near the end. In the final round, Iaquinta landed more demolishing rights that would leave many other fighters wobbling, but Cerrone continued the barrage of front and body kicks and was named the winner by unanimous decision once the five-round war ended (49-45, 49-45, 49-46). Following the spectacular bout, both fighters were awarded a $50,000 performance bonus.

This latest win is the second in a row since Cerrone returned to the lightweight class – his original fighting weight division – after a brief stint in welterweight. He landed a dominant victory against Alexander Hernandez at UFC Fight Night 143 in January and is back on his way to UFC dominance. Counting his last match in the welterweight division – he finished Mike Perry in the first round – Cerrone’s on a three-fight winning streak and seems more motivated than ever to take it to the next level.

What’s next for Cerrone? The Cowboy is still gunning for his first world title, especially after the birth of his son Dacson Danger with whom he celebrated in the cage after Saturday night’s victory.

But if a title bout against champion Khabib Nurmagomedov is not in the cards any time soon, there’s a plan B. Cerrone has been asking for a showdown with Conor McGregor – his best shot at becoming the no.1 contender in the division – and doubled down with a stern message after the fight: “July 4th, Conor McGregor. Let’s go, dude, let’s go.” Whether or not the fight with the Irish superstar will happen at UFC 239 in Las Vegas during International Fight Week 2019 remains to be seen, but Cerrone is ready.

“I would love my next fight to be for a title, but if Conor comes in, let’s go,” said Cerrone.