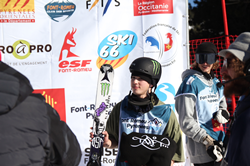 "I just believed in myself, trusted myself and it worked out great.” - Edouard Therriault

Welcome to the Slopestyle podium! Monster Energy congratulates Canadian rookie Edouard Therriault on claiming third place and a career-first podium finish in Men’s Freeski Slopestyle in the FIS World Cup at Font Romeu, France, on Sunday. In the Winter OIympics qualifier sanctioned by the International Ski Federation (FIS), the 18-year-old from Lorraine, Québec, walked away with the bronze medal and crucial qualifier points for the upcoming Beijing Games.

From January 14-16, 2022, Font Romeu hosted the annual FIS Freeski World Cup competition for the fifth time. Some of the best athletes on the circuit competed at the sunny resort surrounded by the Pyrenees Mountains. For extra incentive, the competition marked the final chance to earn qualifier points in the Slopestyle disciplines for the Beijing 2022 Olympic Winter Games.

Monster Energy’s Therriault came to Font Romeu as a wildcard. Although the Canadian rookie already owns a silver medal in the Big Air discipline from the 2021 World Championships in Aspen, he had never claimed a medal in Slopestyle. One week prior, Therriault managed to qualify into the finals at the FIS World Cup at Mammoth Mountain and finished his Slopestyle run in seventh place.

At Font Romeu, Therriault proved that he’s ready to compete in the big leagues. In his first run, he put down a rightside 1260, switch left double cork bio 1260 Indy truckdriver, and leftside 1260 tail grab in the jump section. He then finessed a switch left slide to 450 off over the kicker rail, left slide to back 360-up continuing 270 off on the down-flat-down tube, and Cab 270 on fakie off the flat rail for 81.71 points and third place.

“I’m really happy with my performance. It’s an amazing feeling,” said Therriault after taking third place at Font Romeu. “I had my routine set, and I went into it without thinking or worrying too much about what everybody else was going to do. I just believed in myself, trusted myself and it worked out great.”

Looking ahead, Therriault will bring his skills to X Games Aspen 2022 this coming weekend. Competing in Big Air and Knuckle Huck disciplines, he will make his debut in the world’s largest showcase for winter action sports. Plus, the Beijing 2022 Winter Olympic Games are less than three weeks away and Therriault is a strong contender to represent Canada. Stay tuned!