Witness the latest evolution of freeskiing at epic locations across the globe! Monster Energy is proud to announce the release of ‘SALUTE’, a new feature film envisioned by team rider and Swedish Freeski legend Henrik Harlaut. 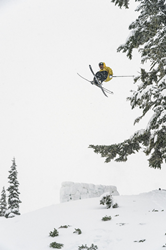 Witness the latest evolution of freeskiing at epic locations across the globe! Monster Energy is proud to announce the release of ‘SALUTE’, a new feature film envisioned by team rider and Swedish Freeski legend Henrik Harlaut.

Available on-demand across platforms such as iTunes, Apple TV, and Amazon Video on November 10, 2020, the 30-minute film showcases Harlaut pushing the sport’s progression alongside certified freeski A-listers and pioneers.

Critics are already raving about the release. ‘SALUTE’ received the award for ‘Movie of the Year’ at the 13th edition of the iF3 snow film festival in October. Harlaut was honored for his performance in ‘SALUTE’ with the award for Best Male Freeride/Freestyle Segment of 2020.

Filmed over the course of the last two years, ‘SALUTE’ was directed by Isaac Sokol and Mattias Evangelista, and produced by Stept Studios and BUG Visionaries. Based on Henrik Harlaut’s unique vision of the sport in which he played a pioneering role as a twelve-time X Games medalist, the project was made possible by support from Monster Energy, Armada Skis, Oakley, Blue Tomato, Grandvalira, Look Bindings, Full Tilt Boots, Harlaut Apparel, Newschoolers, and Downdays.

Starting November 10 viewers can watch ‘SALUTE’ in its entirety on major streaming platforms. Also, watch the official trailer for ‘SALUTE’ on YouTube here.

In the close-knit world of freeski, Harlaut has made his mark as a unique individual and athlete. Known for his hip-hop infused antics and 5XL overalls, the 29-year-old from Stockholm, Sweden, has constantly pushed the boundaries of freeski with never-done-before tricks and unique style. It’s safe to say that Harlaut has changed the freeski scene and brought it to another level. It is this passion that makes ‘SALUTE’ a tribute to the entire freeskiing movement.

Henrik Harlaut is currently the most decorated ski athlete in X Games history with twelve medals to his name (7 gold, 5 silver). Known for constantly raising the bar with innovative tricks such as the ‘Griselda Flip’, Harlaut is respected as the kind of rare athlete who changes their sport forever – a legend. Lewis Hamilton is doing it for F1, John Florence for surfing and Henrik Harlaut for freeskiing. With ‘SALUTE’, Harlaut showcases all unique aspects of the sport and pays tribute to the stylish skiers that paved the way as well as the new generation of talent.

Media representatives can find shareable visuals for editorial use by clicking here. Watch the official trailer for ‘SALUTE’ on YouTube here.