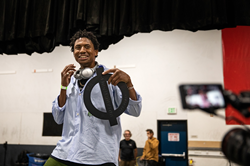 “I haven’t skated a week before this. And I got an old board, new shoes! I thought I was going to do pretty bad, I don’t know.” Monster Energy’s Ishod Wair

Monster Energy congratulates team rider Ishod Wair on taking first place in the SLS Unsanctioned 2 competition held at the Volcom Skatepark in Costa Mesa, California. Competing as part of a hand-picked roster of ten pro skaters, the 29-year-old from Bordentown, New Jersey, took the win in the invitational contest presented by Monster Energy on the strength of his very last trick attempt for an epic come-from-behind victory.

Fans can go online now and watch the 46-minute video featuring all the action from the Street League Skateboarding (SLS) Unsanctioned 2 event. The television showcase was produced by Thrill One Sports and Entertainment, the world’s largest independent action sports company, and will air on ESPN2 on April 29 at 11 pm ET and re-air on May 9 at 10 pm ET. The full-length video is now available to watch for free on YouTube.

The concept for the Unsanctioned event series is a direct response to the effects of the global coronavirus pandemic on skateboarding competitions. When the virus forced Street League Skateboarding to put its renowned World Tour series on hold, the organizers wanted to keep bringing exciting competitions to fans. So in December 2020, with Monster Energy as presenting sponsor, the first edition of SLS Unsanctioned was contested inside pro skater Nyjah Huston’s private skatepark facility.

Winners were decided by a high-profile panel of judges including pro skaters Paul Rodriguez and Torey Pudwill, as well as seasoned SLS judge Kelly Hart from The Nine Club podcast. Each competitor received two Runs as well as a total of five Best Trick attempts. The total score was computed by highest Run score and top two Best Trick scores, with judges looking for difficulty, execution, creativity and style.

When the action got underway in the Run section, Wair found his groove on the tightly stacked Volcom Skatepark course. In his opening run, Wair put together frontside kickflip up the Euro Gap, switch blunt on the quarter, backside boneless on the vert quarter, backside tailslide in the bowl corner, pop shove-it frontside 50-50 the big rail, blunt kickflip the quarter, and a smooth switch heelflip on flat for 22.00 points.

When the Run section wrapped, Wair was trailing outside a podium position in fourth place, while inaugural SLS Unsanctioned champ Dashawn Jordan led the pack with 24.00 points. But Wair still had some tricks up his sleeve: After missing his first three attempts, he needed something special to challenge Chris Joslin’s commanding lead at 64.00 points. Wair found it with a highly technical switch backside tailslide down the double-kinked ledge and into the bank for a whopping 26.5 points.

Keeping his momentum on the very last of five Best Trick attempts, Wair finessed a perfect kickflip frontside crooked grind down the stair rail for 26.00 points and the winning total of 74.5 points. On top of clinching the Unsanctioned 2 victory, Wair also walked away with the Monster Energy H.S.T. (Highest Scoring Trick) Award for his switch backside tailslide down the kinked ledge.

“I haven’t skated a week before this. And I got an old board, new shoes! I thought I was going to do pretty bad, I don’t know,” said Monster Energy’s Wair on winning the SLS Unsanctioned 2 event.

Wair is not known as a typical ‘contest skater’. But when he’s on, he’s on! This latest win at SLS Unsanctioned 2 joins competitive standouts like the gold medal in Skateboard Street at X Games Norway 2019, as well as winning the legendary CPH Open street contest in Copenhagen, Denmark, in 2017 and 2019. The certified Thrasher Magazine Skater of the Year (SOTY) also claimed third place at the 2020 Tampa Pro street contest, his first-ever trophy in the high-profile event.

Also making a strong showing at SLS Unsanctioned 2 was Monster Energy team rider Aurelien Giraud from Lyon, France. Working the course with his signature blend of technical tricks and burly transfers, the 23-year-old put down a stacked run, featuring backside nosegrind the bench, 360 kickflip up the Euro Gap, overturned 180 to switch backside 50-50 and backside noseblunt slide the Hubba ledge, frontside lipslide transfer into the bowl corner, huge frontside tweak air on the vert quarter, and blunt kickflip on the quarter pipe for 23.00 points and one of the highest-scoring runs of the day. In Best Trick, Giraud landed a frontside 180 to switch backside 5-0 down the Hubba (21 points), but ultimately finished in eighth place.

Thanks to Street League Skateboarding and Thrill One Sports and Entertainment for making this exclusive event happen amid the pandemic. In other positive news, both the SLS World Tour and World Championship are set to come back this fall. Stay tuned!

Make sure to watch the official contest video for SLS Unsanctioned 2, live now here. Media representatives can find shareable visuals from SLS Unsanctioned for editorial use by clicking here.