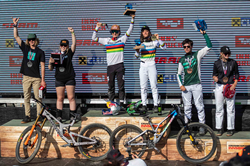 "It’s not the same feeling as winning a World Cup but I’m just happy to see a good result.” - Izabela Yankova

Europe’s most legendary mountain bike contest is back! Monster Energy congratulates team rider Izabela Yankova on her victory in the Deuter Downhill Innsbruck race at Crankworx Innsbruck 2022 this weekend. In the U19 Female division race, the 17-year-old from Teteven, Bulgaria, completed the course with a 03:11.193 finish time, more than five seconds ahead of the next competitor.

From June 15-19, Crankworx Innsbruck welcomed the world elite of mountain bike racing to the foot of the Tyrolean Alps mountains in Austria. Now in Innsbruck for the sixth year, the iconic event featured epic mountain bike races and freestyle contests alongside happenings such as autograph signings, ride outs, kids’ entertainment, and food trucks.

Crankworx started in Whistler, Canada, in 2004 and has evolved into a multi-stop international festival series. As the kickoff to the 2022 Crankworx World Tour, Innsbruck marked the first of four total tour stops, followed by events in Canada (Whistler), Australia (Cairns), and New Zealand (Rotura) later this year. Overall titles will be awarded in pump track, speed & style, dual slalom, downhill and slopestyle disciplines.

Monster Energy’s Yankova came into the event fully focused. Raised in the mountains of Bulgaria, the young upstart has been turning heads on the international circuit for the past seasons. In Innsbruck, she found her perfect line in the finals of the U19 division, reserved for riders under the age of 19. When the dust settled, Yankova blazed down the steep course with a 03:11.193 finish time, more than five seconds ahead of American Riley Miller in second place.

“It was a crazy week here in Innsbruck! I was super stoked to be here at Crankworx World Tour and to race my bike again. Pretty happy to end up in first place in the downhill finals. I'm starting to feel more and more comfortable on my bike. It’s not the same feeling as winning a World Cup but I’m just happy to see a good result,” said Monster Energy’s Yankova upon winning at Crankworx 2022.

What’s next on the downhill mountain bike calendar? Stay tuned for the next race in the UCI World Cup in Lenzerheide, Switzerland, from July 8-10, 2022.