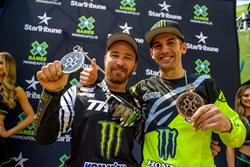 Supported by Monster Energy as the official drink sponsor for the sixth consecutive year, Summer X Games presents the world’s best riders across BMX, skateboard, and motocross disciplines. Rounding out an epic weekend, fans enjoyed immersive experiences in the X Fest village as well as musical performances including Wu-Tang Clan on Friday night and three-time Grammy Award winner Diplo on Saturday at The Armory music venue.

Saturday’s motocross action started with the Monster Energy Moto X Best Trick competition featuring six of the world’s top motocross freestyle riders. Each rider received two attempts to send the most advanced aerial move over the 75-foot gap and the difficulty level was through the roof straight out of the gate.

Coming in hot off the previous night’s Moto X Freestyle silver medal, Sheehan posted an extended double backflip no-hander over the gap, earning him 90.00 points and the bronze medal. The 33-year-old from Donnybrook, Australia, now owns 10 X Games medals (1 gold, 5 silver, 4 bronze), and made history in 2015 as the first (and only) rider to ever land a triple backflip on a motocross bike.

In Moto X Best Whip McNeil finished with a bronze medal. As the final motocross event of the weekend, Moto X Best Whip showcased the ultimate mixture of style and aerial skills on Saturday night. In the four-minute final session, riders attempted to land the most contorted ‘Whip’ aerials – throwing their bike sideways in the air – over the massive dirt gap.

The Whip is a fundamental move in freestyle motocross. But each rider does whips in his or her own unique style, with variations including seat-bounce whips and turndown whips. The world’s best riders – including female motocross trailblazer and Monster Army member Vicki Golden – showcased their unique whip styles. But only four riders advanced into the finals, including Monster Energy riders Sheehan and McNeil.

Previously, McNeil had dominated Best Whip at X Games Minneapolis 2018 and X Games Sydney 2018, and looked destined for a threepeat victory at X Games Shanghai 2019. Then came the wake-up call, as McNeil found himself bumped into second place by Tom Pages from France.

Adding to the challenge, the Best Whip final introduced a rule change: Instead of awarding medals based on the single most stylish whip, the judges were looking for the best overall impression. This meant switching up styles and serving several variations, which McNeil did by sending fully contorted turndown-style whips and his signature seat-bounce whips – practically flying upside down – in the final session. When all was said and done, the 28-year-old from Yarrawonga, Australia, finished in third place, followed by teammate Sheehan in fourth.

ESPN and ABC will televise a combined 18 hours of live X Games Minneapolis 2019 coverage. Eight-and-a-half additional hours of event coverage will be streamed live on the X Games Facebook, YouTube and Twitter pages to fans in the United States. X Games Minneapolis coverage will also be accessible via the ESPN App to viewers who receive their video subscription from an affiliated provider.

Don’t miss out on the action in the Twin Cities. Score all the exclusive updates from X Games Minneapolis 2019 including photos and contest results as they happen visit http://www.monsterenergy.com. Follow Monster Energy on YouTube, Facebook, Instagram & Twitter and watch the official Monster Energy hashtag #unleashedatx on social media.