The season for massive stadium events is over, but Monster Energy’s Jackson ‘Jacko’ Strong is ending the year with a heavy dose of freestyle motocross progression in his high-energy video: ‘Jackson Strong’s Sand Quarry’ 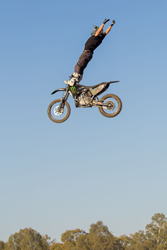 I daydream about building cool jump lines all year, so when my schedule gets a break its go time! I spend my year jumping onto hard clay and portable landings so it’s a breath of fresh air to have the security of nice soft sand under me. Jackson Strong

The season for massive stadium events is over, but Monster Energy’s Jackson ‘Jacko’ Strong is ending the year with a heavy dose of freestyle motocross progression. The 28-year-old FMX icon headlines an elite cast of riders in a high-energy video released to global audiences today across Monster Energy’s social media channels: ‘Jackson Strong’s Sand Quarry’ captures a boundary-pushing progression session on a custom dirt track in a seven-minute-long edit by Headstrong Films.

Jackson Strong himself dreamed up and built the challenging dirt track on the grounds of a 30-acre sand quarry near his hometown of Lockhart, Australia. “I used to ride there as a kid. One of my friends lived next door and we would jump the fence and do shovel jumps,” said Jackson Strong. Over the course of two weeks, ‘Jacko’ moved and shaped about 3000 cubic meters of sand into a never-seen-before freestyle motocross course.

The motivation behind Jacko’s sand quarry: Evolve the sport by building a line of back-to-back dirt jumps – known in mountain biking as a ‘line’ – on the enormous scale of freestyle motocross obstacles. The resulting line starts with a 50-foot Superkicker jump, followed by a competition ramp across a 75-foot gap into a 100-foot dirt jump.

“The super kicker, comp ramp, dirt hit line is a first for FMX. It’s so fun jumping these ramps in a row and they flowed really nicely together,” said Jackson Strong about his course. With minimal set-up time between obstacles, Jacko’s sand quarry is the ultimate test of reflexes and aerial ability.

“I daydream about building cool jump lines all year, so when my schedule gets a break its go time!” said Jackson Strong about the project. “I spend my year jumping onto hard clay and portable landings so it’s a breath of fresh air to have the security of nice soft sand under me.”

“When Jacko makes dirt jumps, he makes them proper. This was sick!” said Monster Army recruit Ben Richards about the session. “It was great to get together and throw it down with the boys to have some fun and throw some whips,” said 33-year-old FMX icon and eleven-time X Games medalist Josh Sheehan, who sent one of the most epic flat-turning 360 airs over the chasm at the quarry.

Jackson Strong and crew spent several days filming and dialing in their aerials at the sand quarry. On the last day of the shoot, the action escalated as Josh Sheehan and Jackson Strong decide to turn it up a few notches and send some of the heaviest tricks in their arsenal down the line in a final blaze of glory. But no spoilers! The only way to find out is to watch the high-energy edit right now.
Download photos for editorial use.