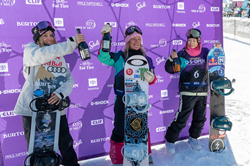 “I’m so happy, this one feels like the best win yet. This is my thirteenth U.S. Open and holy smokes – the level of progression is amazing!” Jamie Anderson

The annual Burton U.S. Open Snowboarding Championships are respected as the world’s longest-running snowboard event. The competition’s humble beginnings date back to the year 1982, a time when the sport was in its infancy and pioneers such as Jake Burton created the foundation for the global culture of snowboarding. Today, the event is broadcast to international audiences and attracts the world’s best male and female riders with a $373,000 overall prize purse.

This year’s Burton U.S. Open was dedicated to the memory of the event’s creator, Jake Burton, who had passed away in November 2019. A snowboard history exhibit and Friday morning’s group ride down one of Burton’s favorite runs – now named ‘Jake’s Stash’ in his honor – celebrated the snowboard pioneer’s life and legacy.

Monster Energy’s Anderson came into the Women’s Snowboard Slopestyle final fresh off a gold medal win at X Games Aspen 2020 in January. Known as the most decorated female snowboarder in history, Anderson was hungry for a top spot after missing the final six at the 2019 Burton U.S. Open.

Reaching deep into her technical bag of tricks, Anderson pulled her winning run right on the first attempt. A stylish backside lipslide down the rail, frontside tailslide 270 out the second rail, alley-oop 540 Indy over the first hip, switch backside 540 mute over the second transition element, frontside boardslide 450 on the cannon box and a switch frontside double cork 900 earned Anderson 84.50 points and the win. Taking her third and final run as a victory lap, Anderson even threw in a Cab 1080 as the final aerial to stoke the crowd.

“I’m so happy, this one feels like the best win yet. This is my thirteenth U.S. Open and holy smokes – the level of progression is amazing!” said Anderson upon winning the Women’s Snowboard Slopestyle final at the Burton U.S. Open today.

Following her win today, Anderson had words of gratitude for Jake Burton: “Big shout to Jake, this event is dedicated to him and what he has brought to this beautiful industry we all get to enjoy now!”

In today’s highly competitive Men’s Snowboard Slopestyle final, the battle between ten of the world’s elite riders came down to a dramatic showdown on the third runs. After Monster Energy’s Darcy Sharpe traded the top spot with defending champion Redmond Gerard and Japanese tech wunderkind Yuki Kadono, the crowd was in for a surprise: Rookie pro Henricksen had a special move up his sleeve, which he unleashed on his last run in the final.

Starting his run on a strong note in the rail section, Henricksen posted 50-50 backside 270 and a technical frontside 270 on 270 out down the kink rail. On the transition elements, the young gun sent a switch frontside 900 double cork japan and a frontside 900 double cork melon, followed by a technical switch noseslide pretzel 630 cork stalefish on the cannon box. For the grand finale, Henricksen landed the first-ever backside 1800 quad cork mute – spinning a full five rotations – in competition, sending the crowd and his peers on the course into a frenzy.

When all was said and done, the judges rewarded Henricksen’s perfect run with 84.70 points for second place, handing the win to Japan’s Yuki Kadano.

Today’s second place finish at the Burton U.S. Open continues a breakout season for young Henricksen. In early February, the rookie turned heads by claiming first place at the Land Rover U.S. Grand Prix at Mammoth Mountain, his first podium at a World Cup contest. As a member of the U.S. Snowboard Rookie Team, the 16-year-old also took the gold medal at the 2020 Youth Olympic Games in Lausanne, Switzerland earlier this year and now commands first place on the FIS 2019/20 Snowboard World Cup season rankings. To be continued…

Also stoking the crowd at the Burton U.S. Open Snowboarding Championships, Monster Energy’s Sharpe seemed like a lock for a podium spot but was bumped on last attempts. Still buzzing from his recent gold medal finish at X Games Aspen 2020, the Canadian put down an extremely well-rounded first run including back 270 on 270 out and switch noseblunt pretzel the kink rail, backside 900 nose/tail double grab, switch backside 900 mute, frontside 180 on switch back 540 stalefish out on the cannon box and a frontside triple cork 1440 for an 83.85-point score and fourth place.

Earlier today, defending Women’s Snowboard Slopestyle champion Zoi Sadowski-Synnott put down three perfect runs in the final, except for one small glitch: The 19-year-old from Wanaka, New Zealand sent difficult tech tricks down the course such as switch boardslide 270 and 50-50 to 360 melon out on the rails, backside 540 stalefish and switch backside 540 stalefish over the shark fins, and 50-50 to backflip the cannon box. But ultimately, Sadowski-Synnott could not reign in her final trick, a technical 1080 double cork mute, and had to settle for sixth place in the competitive final.

Stay tuned for more snowboard action on Vail Mountain tomorrow when Monster Energy’s Yuto Totsuka revisits his rivalry with Australia’s Scotty James in the Men’s Snowboard Halfpipe final. You can catch the live webcast at events.burton.com starting at 4:00 pm EST on Saturday, February 29.