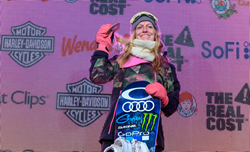 Monster Energy congratulates Jamie Anderson on a strong bronze medal finish in Women’s Snowboard Big Air at Winter X Games 2019 in Aspen, Colorado. In front of a high-energy crowd on Buttermilk Mountain, the 28-year-old snowboard icon from Lake Tahoe, California, rose to the podium despite a heavy fall on a difficult trick attempt.

The crowd was in for a spectacular show tonight as the world’s top female freestyle snowboarders took on the 82-foot gap jump in a 25-minute jam session. The final seven riders hailed from across the globe, including snowboarders from Canada, Finland, Japan, New Zealand, Slovakia and the United States.

Anderson is widely known as a dominant force in Snowboard Slopestyle, but has been constantly upping her Big Air repertoire at every X Games outing. This year, she unveiled a new move on her first finals attempt – a perfect Cab double 900 for a strong 41.00-point opening score. As the jam session intensified, Anderson found herself battling head-to-head against X Games rookie Laurie Blouin from Canada.

A flawless frontside 720 on her second attempt brought Anderson’s total score to 67.00 points. Now it was time to up the ante and take the lead. But she lost control on a highly technical frontside 1080 attempt and suffered a heavy slam on the landing. Forced to drop out of the contest early – but fortunately walking away from what looked like a serious fall – Anderson ceded the win to Blouin and finished in third place.

Tonight’s bronze brings Anderson’s X Games count to 16 medals, including five gold. She is the most decorated female athlete in X Games history and a dominant force in Women’s Snowboarding Slopestyle: A two-time Winter Olympics gold medalist, Anderson has never missed a podium in 14 consecutive X Games and will be defending last year’s Slopestyle gold this weekend.

ESPN, ESPN2 and ABC will televise a combined 15.5 hours of live X Games Aspen 2019 competition, which will also be accessible via the ESPN app and WatchABC to viewers who receive their video subscription from an affiliated provider. In addition, all 15.5 hours of live content, plus exclusive competitions, musical performances and X Games Extra shows will be streamed on the @XGames YouTube, Facebook and Twitter pages.