Another big night of fighting is in the books! Monster Energy congratulates Jessica-Rose Clark on her dominating victory against Sarah “Too Sweet” Alpar at UFC Vegas 11 at the UFC Apex facility in Las Vegas on Saturday night. 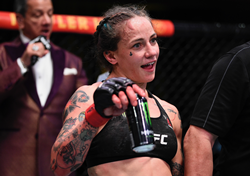 Another big night of fighting is in the books! Monster Energy congratulates Jessica-Rose Clark on her dominating victory against Sarah “Too Sweet” Alpar at UFC Vegas 11 at the UFC Apex facility in Las Vegas on Saturday night. In the women’s bantamweight division match on the Prelims Card, the 32-year-old mixed martial arts expert from Cairns, Australia, claimed the win via TKO stoppage at 4:21 of round three.

In the night’s Main Card welterweight division fight, Monster Energy’s Donald “Cowboy” Cerrone went the distance against Niko “The Hybrid” Price. After three intense rounds, the fight was ruled a majority draw with two judges’ scores of 28-28 and one 29-27 in favor of 37-year-old MMA icon Cerrone.

Saturday’s edition of UFC Fight Night was contested as a closed-to-the-public event in the safe environment of the UFC Apex facility in Las Vegas and broadcast live on ESPN+. The event happened amid enhanced safety protocols to curb the spread of coronavirus (COVID-19), including stringent pre-fight quarantine and extensive testing for fighters and personnel.

Clark (10-6, 1 NC) came to Las Vegas looking for a win after two consecutive losses against Jessica Eye and Pannie Kianzad. Meanwhile, 29-year-old Sarah Alpar out of Amarillo, Texas, stepped into the Octagon on the back of a three-fight victory streak and a reputation as a submissions expert.

But past achievements held no weight at UFC Vegas 11. From the start, Clark aka “Jessy Jess” came out swinging with clean right-hand strikes and punishing elbows to defend against Alpar’s grapple attempts. Drawing on her jiu-jitsu expertise, Clark took the upper hand and scored a takedown in round one. In the second round, Clark maintained the pressure with heavy elbows, strikes, and knee blows supplemented by heavy ground-and-pound whenever the fight moved to the mat.

The action came to a head in round three when Clark followed a front kick and right-hand combo by delivering a damaging knee to the face that bloodied Alpar. The referee momentarily stopped the bout on suspicions of an illegal knee blow, then ruled no foul and let both fighters continue. Following the restart, it was all over for Alpar as “Jessy Jess” delivered more punishment until the referee finally halted the bout via TKO stoppage at 4:21 of round three.

“This definitely feels like the first time I’ve been able to show up on fight night. I feel like I’ve been a good gym fighter over the past couple of years, but I haven’t shown up on fight night. So, I’m very proud of myself for being able to do that tonight,” said Clark upon winning her bantamweight division fight at UFC Vegas 11 on Saturday night, adding: “It’s the most aware I’ve ever been in a fight!”

Saturday’s victory against Alpar puts Clark back in the winners’ circle with a total record at 10-6, 1 NC. Expect big things in the future for “Jessy Jess” and keep an eye out for updates on future fights.

In Saturday night’s Main Card welterweight division fight against Niko “The Hybrid” Price, Monster Energy’s Cerrone held no punches. Cerrone stepped into the Octagon hungry for a win after suffering losses against Conor McGregor and Anthony Pettis earlier this year.

The fight started with Price on the offense, hitting Cerrone with hard shots. Drawing on years of experience as a top UFC pro, “Cowboy” fired back with precise counterstrikes and derailed Price with targeted knees after a clinch. However, Cerrone was visibly rattled by not one, but two illegal pokes to the eye, the second costing Price a point on the scorecards.

Both fighters continued to unload punches in the second round, with Cerrone landing the heavier blows and staying dangerous on his counter strikes and low kicks. In the final round, Cerrone surprised his opponent with a takedown from up high, then landed a big head kick after the break. In the final moments of the fight, Cerrone connected a hard left hook as the two brawled all the way until the bell. When all was said and done, the fight ended in a majority draw with two judges’ scores of 28-28 and one 29-27 in favor of Cerrone.

The majority draw against Niko Price marks the first draw in Cerrone’s career (36-15-1, 1 NC). Training out of Albuquerque, New Mexico‎, the bona fide MMA legend holds numerous UFC records, including most victories for any fighter with a total of 23.