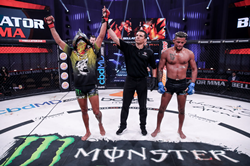 We have a new champ! Monster Energy congratulates Juan “The Spaniard” Archuleta on winning the Bellator bantamweight championship belt against Patrick “Patchy” Mix at Bellator 246 inside Mohegan Sun Arena in Uncasville, Connecticut, on Saturday night. In a strong five-round performance, the 33-year-old from Sultana, California, earned the vacant 135-pound division title via unanimous decision and handed Mix his first professional defeat.

Bellator 246 was part of a double headline event weekend, alongside Bellator 245 – Davis vs. Machida II on Friday, at Mohegan Sun resort and casino. Aired on Paramount and streamed on DAZN, Bellator 246 – Archuleta vs. Mix was contested as a closed-to-the-public event amid extensive COVID-19 safety protocols for staff, officials and fighters.

After a night of strong performances at Mohegan Sun Arena, all eyes were on Saturday night’s main event title fight. Archuleta stepped into the Octagon with one of the most impressive career records in mixed martial arts fighting, having won 19 of his past 20 fights. But his opponent, 27-year-old Mix out of Albuquerque, New Mexico, had earned his title shot by winning all of his 13 fights as a professional, including nine wins by submission.

Right from the start, Mix attempted to take the fight to the ground where his jiu-jitsu grappling skills are most lethal. Archuleta responded with controlled strikes and fast footwork, looking to escape danger and keep Mix at a distance. But inevitably, the submission specialist landed several brutal takedowns and began dominating Archuleta from the top with arm-triangle and rear-naked choke attempts. Drawing on his veteran fighting skills, Archuleta averted some early submission finishes, but Mix clearly controlled the fight.

Until Archuleta flipped the script. Close to the end of Round 2, “The Spaniard” escaped his opponent’s grapple and fired back with a heavy body shot, followed by intense ground-and-pound until the bell. From there, Archuleta kept the fight upright and found his rhythm. Circling the Octagon with fast movement, Archuleta proceeded to demolish Mix by landing shots to the body while countering takedown attempts with targeted jabs and combos to the head.

Visibly worn down by Archuleta’s barrage, Mix slowed down in the final two rounds. His counter punches often swinging at air, the jiu-jitsu expert found himself overpowered, as “Spaniard” asserted his dominance in Round 5 by landing a big right to the head and a punishing elbow after a final clinch. When the judges turned in their scorecards, Juan Archuleta emerged as the winner by unanimous decision (49-46, 48-47 and 48-47) and newly crowned bantamweight champion.

In his interview following the spectacular fight, Archuleta thanked UFC icon Cub Swanson for providing guidance in preparation for the title bout: “He showed me how to battle through adversity, how to fight someone who is an undefeated jiu-jitsu fighter, stick to a game plan. He said, ‘I promise you; you fight like that and you walk home with the title.’ Guess what? I'm walking home with the title!”

Winning the Bellator bantamweight championship is the highest-profile victory for Archuleta (25-2 MMA), who trains out of Joe Stevenson’s Cobra Kai. The title had been vacant since November 2019, when Kyoji Horiguchi surrendered the championship due to injury. “This is the best birthday present I can give myself,” said Archuleta, who turned 33 on September 13.

Congrats to the newly minted champion and thanks to Bellator and Mohegan Sun for showcasing world-class fighting events amidst the adversities of the global coronavirus pandemic.