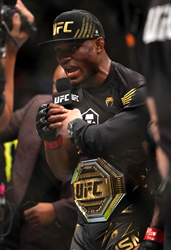 “I mean, when you share an octagon with someone this tough, you can’t help it. That respect is going to come. He hit me with some shots, and I could tell they've been working on it." - Kamaru Usman

And still the champions! Monster Energy congratulates Kamaru Usman on defending his UFC Welterweight Championship title at UFC 268 in New York City on Saturday night. In the main event fight inside sold-out Madison Square Garden, the 34-year-old from Auchi, Nigeria, earned a unanimous decision victory in the rematch against American Colby Covington.

Earlier in the night’s co-main event in the women’s strawweight division, Monster Energy’s Rose Namajunas retained her championship belt against former champion Weili Zhang from China. In the highly anticipated rematch, the 29-year-old from Milwaukee, Wisconsin, went the distance in the closely contested fight to earn a split decision victory.

Also on the main card, the epic showdown between Monster Energy fighters Justin Gaethje and
Michael Chandler earned the UFC’s Fight of the Night bonus. Their teammate, 28-year-old Marlon Vera from Ecuador received a $50,000 Performance of the Night bonus for his thundering head kick knockout win against Frankie Edgar.

In the night’s main event, newly minted Monster Energy team athlete Kamaru Usman (20-1) revisited his long-time rivalry with Colby Covington. Usman initially faced Covington (16-3) in his first title defense at UFC 245 in December 2019, ending the fight by TKO in Round 5 to claim the record for latest stoppage in welterweight division history.

Anticipation was running high inside Madison Square Garden as the two fighters revisited their rivalry. From the start of Round 1, both fighters started throwing heavy punches, with Usman landing the more significant strikes and exploiting openings with swift precision. A key scene in the fight unfolded toward the end of Round 2 when Usman dropped Covington to the canvas twice with hard-hitting right hands but could not lock in a stoppage before the bell.

After the two rivals exchanged more blows on the feet in Round 3, the fourth round saw Covington demonstrate his signature resilience, suddenly firing back at the champ with kicks to the body. Round 5 was reminiscent of the intensity and ferociousness of Usman’s first fight against Covington with both fighters swinging for ultimate damage. But when all was said and done, defending UFC Welterweight Champion Usman retained the upper hand in the fight to earn the unanimous decision victory (48-47, 48-47, 49-46).

“I know there was a lot of trash talk and bad blood and there’s still going to be some after tonight. But he's a tough son of a b---. I mean, when you share an octagon with someone this tough, you can’t help it. That respect is going to come. He hit me with some shots, and I could tell they've been working on it,” said Monster Energy’s Kamaru Usman after his victory at UFC 268 in New York.

Saturday night’s title defense against Covington extends Usman’s win streak to 15 fights, the longest among active UFC fighters. Nicknamed “The Nigerian Nightmare”, Usman has now held the UFC Welterweight World Championship for over two years and defended his belt five times. He is currently the only UFC fighter with a perfect takedown defense. The former U.S. collegiate national wrestling champion made his UFC debut after winning the Ultimate Fighter 21 tournament in 2015. Usman had claimed the belt from Tyron Woodley at UFC 235 in March 2019.

Only six months had passed since Namajunas dethroned Zhang at UFC 261 in Jacksonville via a stunning knockout victory in Round 1. That night, she reclaimed her title – Namajunas was the reigning strawweight division champion from November 2017 to May 2019 – and earned the UFC’s $50,000 Performance of the Night bonus for her spectacular head kick knockout.

The energy inside Madison Square Garden was palpable as the two rivals entered the Octagon inside Madison Square Garden for their rematch on Saturday night. Straight out the gate, both fighters attacked with intensity, Namajunas landing strategic counterstrikes and slowing down Zhang with precise hits. In return, Zhang stunned the champion with a heavy left in Round 2.

As the fight wore on, two-time UFC strawweight champ Namajunas found herself under pressure by Zhang’s improved wrestling. But after defending against powerful submission attempts and using head kicks from the ground to escape, Namajunas regained control and proved the stronger, more versatile fighter in the fourth and fifth round, in which she demonstrated superior ground control. After a close battle, the judges pronounced Namajunas as the winner by split decision (48-47, 47-48, 49-46) to defend her UFC Women’s Strawweight title.

“I had a feeling it was going to be a way tougher fight and she improved a lot. I know what I’ve got to work on now,” said Monster Energy’s Namajunas after retaining her UFC Women’s Strawweight title at UFC 268. “It was different. I was pretty confident in the end that I won it. The first couple rounds were pretty close. I wasn’t even too worried about the result, just doing my best.”

Saturday night’s victory cements Namajunas as the only two-time UFC Women’s Strawweight Champion in 115-pound division history, and the only fighter to successfully defend the title during both reigns. Namajunas holds the record for most stoppages in the 115-pound division at five, with Saturday’s win bringing her record to twelve professional MMA career wins (12-4-0). Born to Lithuanian parents who had moved to the United States in 1991, Namajunas began practicing taekwondo at age 5 and has built one of the most outstanding careers in the Ultimate Fighting Championship (UFC).

After a heated back-and-forth exchange between Vera and Edgar, the crowd was in for a surprise in Round 3. Sensing a gap in Edgar’s defenses, Vera connected a swift top kick to the chin that knocked Edgar to the ground, followed by punches to seal the victory by third-round knockout. The move earned Vera the UFC’s coveted Performance of the Night Bonus.

Hailing from Chone, Ecuador, Marlon Vera made his professional MMA debut in February 2012. The Black belt in Brazilian Jiu-Jitsu‎ competed in regional promotions across Latin America before appearing as a contestant on The Ultimate Fighter: Latin America reality television show in 2014. He made his official UFC debut later that year and has since built an impressive track record. Vera currently holds the record for most finishes in UFC Bantamweight division history at nine.

What happened next in the octagon exceeded the wildest expectations. Losing no time, Gaethje and “Iron” Michael Chandler began unloading punches on each other, with former three-time Bellator Lightweight World Champion Chandler dealing much damage during the early stages of the fight.

But it was Gaethje who tilted the balance in his favor, wearing Chandler down with effective leg kicks and bloodying his opponent with heavy strikes. Despite absorbing massive damage, Chandler kept coming back until the very end, still ready to return fire before the classic fight was ended by the bell.

When the dust settled, Gaethje was pronounced the winner of the epic 15-minute throwdown by unanimous decision (29-28, 29-28, 30-27). The no-holds-barred battle also earned the UFC’s Fight of the Night bonus and is a viable candidate for Fight of the Year.

“He is a warrior,” said Gaethje about Chandler after the win. “We are living in the wrong times. Me and him should have been fighting to the death in the Coliseum.”

As the most recent addition to Monster Energy’s MMA team, Justin “The Highlight” Gaethje is the former Interim UFC Lightweight Champion. Although he is an All-American NCAA Division wrestler, Gaethje is known for his powerful striking and knockout abilities. He is currently ranked #2 in the UFC’s Lightweight division.