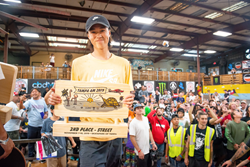 The new generation is crushing it! Monster Energy congratulates Japanese team rider Keyaki Ike on claiming second place in the skateboard street event at Tampa Am 2019 in Florida this Sunday. In front of a capacity crowd inside Skate Park of Tampa (SPoT) and thousands of global web stream viewers, the 18-year-old rookie from Osaka, Japan, earned his podium spot in a field of more than 200 of the world’s best amateur street skateboarders.

Presented by Monster Energy as the official drink sponsor, Tampa Am has grown from humble beginnings in 1995 into the most important amateur competition in the skateboarding universe. Contested every year at the legendary Skate Park of Tampa (SPoT) over the course of an action-filled weekend, Tampa Am is where the best amateur skateboarders from across the globe battle it out for fame and cash prizes.

Closely watched by team managers from major skateboard labels, Tampa Am is also the place where some of the most successful pro careers are born. The long list of Tampa Am winners turned headline pros includes Monster Energy team riders Nyjah Huston, who won Tampa Am in 2005 at age 10, and Aurelien Giraud (2015). Aside from the main street skateboarding event, riders also have a chance to make their mark in cash-for-tricks sessions and the annual Cons Concrete Jam bowl riding competition.

For the 2019 edition of Tampa Am, more amateur skateboarders than ever showed up, ready to make this event the turning point in their careers. But competition was fierce: A field of 144 competitors entered Friday’s Last Chance Qualifier to claim one of only ten spots into Saturday’s official qualifier to meet the 90 highest-ranked riders on the Damn Am circuit. With only 30 riders moving on to Sunday’s semifinal, the contest created the kind of pressure cooker atmosphere only to be found at Skate Park of Tampa.

When all was said and done, Monster Energy Japan team rider Keyaki Ike emerged from the heavy semifinal session in first place thanks to a flawless run. In the final, the weekend’s top 12 riders cranked up the heat another notch, as the energetic crowd cheered on perfect runs and technical tricks on an unprecedented level.

On Saturday night, the festival crowd at Skate Park of Tampa was treated to the annual bowl skating throw down known as the Cons Concrete Jam. Spirits were high as riders pushed their limits for the overall title and a $4,000 purse in cash-for-tricks money. Once the epic session wrapped up, the judges named Monster Army recruit Jake Yanko the overall winner on the strength of a high-speed frontside Smith grind transfer into the bank, alley-oop 5-0 grind over the doorway, huge frontside air to disaster, alley-oop backside lipslide on the extension, and a mind-boggling Indy nosepick way up on the wall-mounted box extension over six feet above the lip. Yanko also went big in the Independent Best Trick event on the bank-to-wall with an ollie up to backside 50-50 transfer across the entire obstacle into the quarterpipe and backside boneless on the wall ledge above.

Another talented 13-year-old, Monster Army rider Daiki Ikeda from Tokyo, Japan, sailed perfectly caught 360 flips over the big pyramid. The skate prodigy, who won the gold medal in the Junior Street Division at X Games Minneapolis 2019, also claimed his bundle in cash-for-tricks. Definitely keep an eye on these two young riders already sending heavy tricks far beyond their age class. Monster Energy team rider Gabriel Fortunato from Brazil closely missed the finals, but stoked the crowd with 360 flips over the big box, backside 180 to 50-50 the box ledge, and backside 270 lipslide the pyramid rail.

Congrats again to the entire amateur skate team on crushing it at Tampa Am 2019. The future looks bright with this new wave of next-generation talent!

In case you missed this weekend’s live webcast from the Tampa Am 2019 Semifinal and Final, you can watch a full replay on the official Skatepark of Tampa YouTube Channel.

Monster Army Rider Daiki Ikeda from Tokyo, Japan skated in the Tampa Am