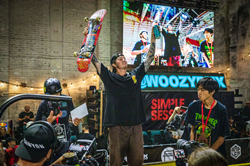 A huge weekend for action sports in one of the most storied contests is in the books! Monster Energy congratulates team rider Liam Pace on taking first place in the skateboard event at Simple Session 22 in Estonia. In the 22nd edition of the iconic action sports and music showcase, the 21-year-old from Tucson, Arizona, took the win amid an international field of riders.

From June 11-12, Simple Session 22 attracted over one hundred of the world’s best invited BMX street riders and skateboarders to Tallinn, Estonia. At the venue in the Põhjala Factory district, competitors put on an exciting showcase on the 1,800-square-foot Wessel-designed street course.

For the past 22 years, Simple Session has featured some of the biggest names in action sports in a festival atmosphere. Brothers Risto, Mario Kalmre, and Piret Kull started the now world-renowned event series in 2000. This year, the event once again featured free-to-the-public events such as concerts, DJ sets, as well as an outdoor festival area, mini ramp jam, and movie screenings.

Here’s how the action went down for Team Monster Energy at Simple Session 22:

In the skateboarding event, the challenging course with its oversized obstacles called for a special type of rider who can do it all: Airs, transfers, lip tricks, and the right amount of tech. As the contest progressed, Monster Energy’s Liam Pace left no doubt that he commands the all-round skills to amaze the crowd and judges.

In his second run, Pace put on a high-speed display featuring crooked from flat rail to pyramid, big backside boneless plant on the wall, manual the large centerpiece, huge frontside nosegrind the vert quarter into the bank below, feeble grind 180 up(!) the kink rail, frontside 180 into the kicker and fakie ollie onto the wall ride, frontside 180 air over the spine, backside disaster the quarter pipe, frontside feeble the quarter, backside 50/50 grind the long flat rail, and a 540 Indy air into the wall after the buzzer for 82.75 points and the win.

Pace continuously evolved his skills as part of the Monster Army support program. At X Games 2021, the rookie caused an upset by claiming the gold medal in the Skateboard Park event. He has since maintained his momentum by claiming bronze at X Games Chiba 2022. Now a full-fledged Monster Energy rider, Pace remains one of the hottest upcoming skateboarders to watch.

When the action moved into the BMX Street final, the crowd at Simple Session created the kind of tumultuous energy the contest is known for. Monster Energy's Prangenberg coasted into the final as the first-place qualifier. But on his first run, the German all-round rider suffered an unfortunate crash. This left everything riding on the second and final run – and Prangenberg delivered a comeback run for the Simple Session history books.

In front of the roaring crowd, Prangenberg put down bar spin into the bank, nose grind revert the rail, nose pick on the barrier, foot plant over the rail, backside 180 transfer from Hubba to Hubba, bar spin 180 to tail whip 180, 360 fakie on the wall ride, peg grind 180 the rail, huge 180 over the spine, big 540 off the platform and flair on the quarter pipe. When all was said and done, the run netted Prangenberg 96.66 points and a close second place behind Australia's Boyd Hilder in first place with 97.5 points.

Prangenberg was joined on the podium by UK team rider Jordan Godwin. The street technician stoked the crowd with switch tricks like a switch hanger to switch-foot switch crankarm grind to 180 down the handrail, peg grind 360, and grind up to manual to grind across the box for the highest run score of 94.16 points and fourth place.

Also advancing all the way to the podium in Estonia, Monster Energy’s Kevin Peraza took fifth place with a solid run in the final. Representing Mexico in this international contest, Peraza blasted a massive 360 over the spine, down whip the pyramid, layback on the big wall ride, and 360 to bar spin for 92.33 points.