Monster Energy’s congratulates Loris Vergier on another top podium result for the Frenchman this weekend at the French Cup DH #2 in Les Deux Alps. 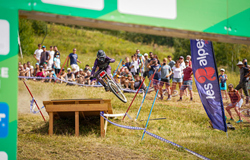 "I am really excited to get another podium in back-to-back races and always try to go as fast as I can. Bring on next weekend at the French Champs." Loris Vergier

Monster Energy’s congratulates Loris Vergier on another top podium result for the Frenchman this weekend at the French Cup DH #2 in Les Deux Alps. It was a complete French podium where Vergier earned third place, his second podium in only a few weeks. Vergier took first place at the French Cup last week in Alpe d’Huez.

The fastest DH riders on the planet once again congregated at the French national event to compete in one of the only scheduled race events on the calendar. A strong showing of athletes made their way to compete in the French Cup adding extra hype and energy to this event, despite the event restrictions due to Covid-19.

“Tricky weekend – conditions were changing and there was lot of dust, ruts and holes. The track wasn’t really holding up,” said Vergier. It made the race challenging and a lot of people crashed. I made tiny mistakes, but still ended up on the podium. I am really excited to get another podium in back-to-back races and always try to go as fast as I can. Bring on next weekend at the French Champs.”

Monster Energy and Santa Cruz/ Syndicate teammate Luca Shaw also grabbed an excellent finish with a 6th place overall and continues his run of top 10 finishes. He finished in 5th at the French Cup in Alpe d’Huez.

In the junior category, young gun and Monster Army recruit Ike Klaassen seized a strong 3rd place podium finish, proving his worth, as his first time on the circuit and one of the youngest riders in the field. Ike is no stranger to the podium this year with a strong fifth place finish last week at the French Cup in Alpe d’Huez, and one week prior to that he claimed second place in a similar French national race. The Dutch/South African rookie is already proving himself a force to be reckoned with.

“It’s sick that we’re able to race! Most of the factory teams were there, so the level was super high. I’m hyped that I got third, said Klaassen. It was probably the hardest track I have ever raced because it was so blown out and dusty, and every run the track was completely different. I was one second off first place, so the top three spots were all within a second. It’s just so good to be racing and able to keep our heads in the game. Hyped!”

With more DH events set to crop up in Europe, we’ve got our eyes peeled on the Monster Energy team and their continued successes.