Back to back wins for the ‘Flying Frenchman’! Monster Energy congratulates Loris Vergier on taking first place in the Elite Men’s Racing event in round two of the Mercedes-Benz UCI Mountain Bike World Cup in Maribor, Slovenia on Sunday. 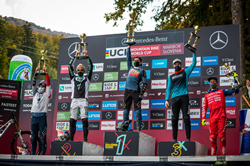 “I’m really stoked to be out there fighting for the win and making the double victory. I had a really good run and felt awesome on the bike on the first round, everything just clicked." - Loris Vergier upon winning Round Two of the UCI MTB Downhill World Cup 2020 event in Maribor, Slovenia.

Back to back wins for the ‘Flying Frenchman’! Monster Energy congratulates Loris Vergier on taking first place in the Elite Men’s Racing event in round two of the Mercedes-Benz UCI Mountain Bike World Cup in Maribor, Slovenia on Sunday.

After already clinching the win in Friday’s opening race of a double-header weekend, the 24-year-old from Cagnes-sur-Mer, France, won the second race with a 3:07.771 total time to mark his third career World Cup victory. Vergier was joined on the podium by his Monster Energy teammate, 27-year-old Troy Brosnan from Adelaide, South Australia, in fifth place. In a tightly contested race, the Australian trailed Vergier by a single second with a 3:08.787 total time.

As the official opener to the 2020 UCI Mountain Bike World Cup season, the Maribor event in the Eastern Alps mountains offered two chances to collect important points towards the world championship title. After Friday’s race saw Vergier emerge victorious despite muddy track conditions, Sunday offered a change of scenery: Track two was a fairly close recreation of the racecourse from early Maribor years in the early 2000s, when Monster’s own Sam Hill claimed his win in 2008.

Legendary for its tight turns in the trees and high-speed grass corners, the track featured plenty of technical roots and natural doubles in the woods. In order to claim the win, riders would have to slow down the pace dramatically in the upper sections and choose their lines strategically compared to the high-speed sections of the first round. Conditions also improved over the first round, as sunshine and a breeze prepared the mountain for exciting racing. The only thing unchanged was Vergier’s dominance.

Monster Energy’s Vergier worked the course with confidence and precision, trying to improve on a strong performance by Britain’s Matt Walker on the top of the leaderboard. Despite some challenging moments in the woods section, Vergier found his line and finished on top of the order with a 3:07.771 total time. In a close call, Vergier’s good friend Loïc Bruni finished only 0.057 seconds slower in this exciting season opener in Slovenia.

“I’m really stoked to be out there fighting for the win and making the double victory. That is obviously crazy. I had a really good run and felt awesome on the bike on the first round, everything just clicked. But it was really hard to focus and reset and do the same two days after. I still managed to take the win by a really small margin, so it’s been awesome!” said Vergier upon winning Round Two of the UCI MTB Downhill World Cup 2020 event in Maribor, Slovenia.

The back-to-back wins at Maribor bring Vergier’s career count to three World Cup victories on top of his win at the 2018 World Cup race in Vallnord, Andorra. “I realized today that I won two World Cup events in a row and that’s crazy, I’m stoked about it. I want to keep the jersey on for a bit longer. I’m having fun out there and looking forward to Lousã now,” said Vergier, who now sits on top of the season UCI Mountain Bike Downhill World Cup rankings with 400 points.

Also finishing in a podium position, Monster Energy’s Brosnan from Australia cleared the technical course with a 3:08.787 total time for fifth place. After having to settle for eighth place in Friday’s race, Brosnan found his line on Sunday.

“It’s nice to be near the top again in Maribor. The track was pretty hectic and the new sections for race two were definitely my favorite. I’m happy to be right up on the pace, so I’m looking forward to a week off and then hopefully we go racing in Portugal for the last two rounds,” said Brosnan.

“I was happy with how I rode. A tough couple of weeks are done now, I’m looking forward to getting home for a few days, hopefully to come out swinging in Portugal in a couple of weeks,” said Hart.

On that note, the next stop on the 2020 UCI Mountain Bike World Cup season will be contested in two weeks in Lousã, Portugal from October 30 – November 1, 2020. This stop will feature another double header with two rounds on a brand-new track to the World Cup circuit.

Also make sure to check out Vergier, Brosnan, and Hart in a stunning new video feature that provides an unfiltered look into the life of leading downhill mountain bike racers: Monster Energy’s ‘Between the Races’ is available now to watch for free on YouTube here.