Ride everything and always push the limits! That’s exactly what Monster Energy’s Maggie Voisin came to do in her latest freeski video release. 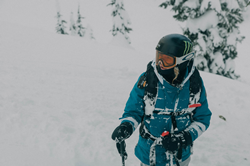 "I think people will be surprised to see that most of the skiing is not done sliding rails and hitting massive jumps. The mountains and backcountry are another part of skiing that I am truly passionate about and I wanted to share that passion with other people." Maggie Voisin

Ride everything and always push the limits! That’s exactly what Monster Energy’s Maggie Voisin came to do in her latest freeski video release. Watch the 21-year-old Team USA rider from Whitefish, Montana, expand the boundaries of freeski progression across competitions, snow parks and backcountry terrain in the new “Swiftcurrent” video.

Filmed over the course of the last two winter seasons, the 4:39-minute edit showcases the full scope of the Olympic freeskier’s diverse talent in a high-energy edit. Viewers are in for a special experience: Maggie is the only woman in skiing releasing an edit with park, competition, and backcountry footage this year and one of the few to ever combine all disciplines while competing.

“I think people will be surprised to see that most of the skiing is not done sliding rails and hitting massive jumps. That aspect of my skiing is only one piece of what I want to do in my career. The mountains and backcountry are another part of skiing that I am truly passionate about and I wanted to share that passion with other people,” said Voisin about the project.

Directed by Kyle Decker and produced by Tom Yaps, the video follows Voisin over the course of her most successful competitive season to date. “Swiftcurrent” features highlights from global events such as the Winter X Games in Aspen and Norway. Also private expeditions into the backcountry, on which Voisin explores unique lines and spectacular jumps away from the spotlight. On a personal note, “Swiftcurrent” is named after a mountain pass in Glacier National Park, Northwest Montana, where her father would take her skiing.

“Overall, this film project has sincerely opened my eyes to the world of backcountry skiing. I have so much more to learn in the backcountry and I’m excited to keep challenging myself in new ways and finding out what the future has in store for me,” said Voisin.

Viewers can now go online and watch “Swiftcurrent”, live on YouTube in full HD. As the soundtrack, the fast-paced video is set to the song “Kyoto”, performed by LA-based Indie singer and songwriter Phoebe Bridgers, courtesy of Dead Oceans records.

The release of “Swiftcurrent” is a personal achievement for Voisin. In February of 2019, she was headed to Cooke City, Montana to begin filming for this, her first solo video project. But only one month later in Park City, doctors diagnosed a torn ACL that required surgery and intense rehab.
The injury not only put the video project on an indefinite hold, but also jeopardized Voisin’s upcoming competitive season.

Just in time, Voisin returned in the winter of 2020 to put down the most successful season of her young career. She brought home three X Games medals in 2020, including Slopestyle gold and Big Air silver at X Games Norway, and also claimed bronze at the Land Rover U.S. Grand Prix at Mammoth Mountain. In May 2020, the U.S. Ski & Snowboard Team named her Freeskiing Athlete of the Year for her spectacular season.

Outside of the contest arena, Voisin managed to continue filming on snow park terrain and out in the back country across Utah, Montana, and British Columbia. Always pushing her personal limits and with an eye for laying down state-of-the-art tricks like double backflips on natural powder slopes, Voisin presents a uniquely diverse visual experience in “Swiftcurrent”.

“I wanted this film to be about me pushing myself out of my usual park skiing element and comfort zones in a whole different way than I am used to. That is exactly what I was able to achieve, and I realized in the end, it's a great privilege that, as athletes, we get to create content that we are passionate about,” said Monster Energy’s Voisin.

But better see for yourself! Watch the new “Swiftcurrent” video supported by Monster Energy, Spyder, K2, and Land Rover, live now on YouTube. Also make sure to read the background story on the Monster Energy website, featuring an exclusive interview with Voisin about the genesis of this unique solo video project.