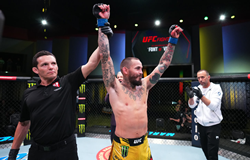 “When you work hard, you have the most chances to survive. When you do everything to win, when you put everything aside, life gives you a good victory." - Marlon Chito Vera

An epic battle all the way to the finish! Monster Energy congratulates Marlon “Chito” Vera on defeating Rob Font at UFC Vegas 53 on Saturday night. In the night’s headline fight contested in the Bantamweight division, the 29-year-old from Chone, Ecuador, went the distance across five rounds to earn a unanimous decision victory (49-46, 49-46, 48-47) in the first UFC headline fight of his career.

The heated five-round battle also earned Vera the UFC’s coveted Fight of the Night bonus with a $50,000 paycheck. And because his opponent, Rob Font, had missed weight for the 135-pound division fight, Vera also pocketed his share to walk away with $100,000 in bonus payout.

UFC Vegas 53: Font vs. Vera was contested in front of a live audience inside the UFC Apex facility in Las Vegas and broadcast live on ESPN+. The event, headlined by Monster Energy’s Vera, marked a special anniversary for the Ultimate Fighting Championship (UFC): UFC Vegas 53 was the 100th Fight Night in a series that now spans events across 39 cities. A total of five UFC champions were crowned during Fight Nights and 53 events were held at the UFC Apex facility in Las Vegas.

Fit for the occasion, the crowd was in for something special in Saturday’s headline fight. Monster Energy’s Vera (19-7-1) stepped into the Octagon on a two-fight win streak while ranking in eighth place in the UFC’s Bantamweight division. At UFC 268 inside Madison Square Garden, Vera had earned a spectacular knockout victory against Frankie Edgar, and previously stopped Davey Grant in the main card fight at UFC Vegas 29.

Vera faced a formidable adversary in knockout artist Rob Font (19-6), who stepped into the fight ranked fifth in the UFC’s Bantamweight division and was looking for redemption after a recent loss against Brazil’s Jose Aldo.

Straight from the start, the two fighters lost no time engaging at the center of the Octagon. While Font tried to dial in his signature one-two jab combos, Vera remained on the backfoot looking for openings to connect surprise kicks to the body.

As the fight continued, it was Font who landed the most volume, hitting Vera with over 200 significant strikes across five rounds. But Vera not only absorbed the damage but countered with tremendous firepower that put Font at the verge of stoppage several times throughout the bout. This first became apparent when Vera rocked Font to the canvas at the end of Round 2 by landing a fierce left hook punch followed by tomahawk elbows, leaving his opponent scrambling until the bell.

An equally dramatic scene unfolded at the end of Round 3 when Vera floored Font by connecting a heavy knee to the face. Again, time ran out before Vera could secure the finish with elbows, but his visibly battered opponent sensed the danger. In the fourth round, Vera dropped Font again via head kick with more than two minutes on the clock, but the American demonstrated his toughness and refused to quit. Round 5 saw Font continue throwing jab combinations, but another stunning hook kick from Vera clearly demonstrated who held the power in this all-out war across five rounds.

After twenty-five minutes of battle that left Font battered, bruised, and bloodied, the judges chose their winner by unanimous decision: Monster Energy’s Vera took the win (49-46, 49-46, 48-47) and the UFC’s $50,000 Fight of the Night bonus. It’s a key victory for the Ecuadorian that puts him closer to a title shot in the Bantamweight division.

“When you work hard, you have the most chances to survive. When you do everything to win, when you put everything aside, life gives you a good victory,” said Monster Energy’s Vera upon winning the headline fight at UFC Vegas 53.

Born and raised in Chone, Ecuador, Marlon Vera made his professional MMA debut in February 2012. Vera initially competed in regional promotions across Latin America before appearing as a contestant on The Ultimate Fighter: Latin America television show in 2014. The Black belt in Brazilian Jiu-Jitsu‎ made his official UFC debut in 2014. Vera currently holds the record for most finishes in UFC Bantamweight division history at nine and ended seven of his fights via knockout.

What’s next for Marlon Vera? Having won three consecutive fights, Vera is eyeing the division’s top-ranked fighters for his next bout, including a rematch against Aldo. “I would love to fight Aldo again, and especially in a five-rounder, just because he declined a five-rounder when we fought last December,” said Vera in Vegas. The ultimate goal? “I’m going to be a world champion. I’m bringing the belt to Ecuador. Believe that!”