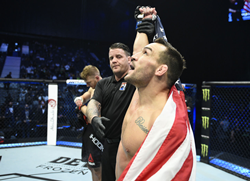 He has arrived! Monster Energy congratulates “Iron” Michael Chandler on his dominant knockout victory against Dan Hooker in the Co-Main Event fight at UFC 257 on Saturday night. In the Lightweight division bout inside Etihad Arena on Yas Island, Abu Dhabi, the 34-year-old mixed martial arts icon from High Ridge, Missouri, made his successful debut in the Ultimate Fighting Championship (UFC) promotion with a thundering first-round technical knockout. The fight also earned Chandler the UFC’s ‘Performance of the Night’ award with a $50,000 payout.

UFC 257 was contested in the UFC’s main home for international matchups during the coronavirus pandemic, the Fight Island facility in Abu Dhabi, United Arab Emirates. The highly anticipated event happened amid enhanced safety protocols to curb the spread of Covid-19, including stringent pre-fight quarantine and extensive testing for fighters and personnel. A limited number of spectators were allowed inside the new state-of-the-art Etihad Arena with full Covid-19 restrictions in place.

Chandler (22-5) stepped into the Octagon in his first-ever fight as a UFC athlete. Before signing with the UFC in 2020, Chandler made history as the first three-time Bellator MMA Champion. For his UFC debut, Chandler faced 30-year-old knockout artist Hooker (20-10) from Auckland, New Zealand. Nicknamed “The Hangman”, Hooker came to Fight Island ranked as the No. 6 UFC Lightweight contender and the betting odds favorite over Chandler.

The audience was in for a fast and furious Co-Main Event fight. Right from the start, Chandler brought the pressure and proceeded to chase Hooker around the Octagon. Hooker evaded Chandler’s strikes, maintaining his distance by incessant calf kicks that only delayed the inevitable.

The fight escalated when Chandler landed a heavy combo of straight right to the body and left hook to the head that instantly dropped Hooker. From there, the former Bellator MMA lightweight king made short work of the New Zealander. Chandler unloaded a flurry of right hands from above until referee Herb Dean called a TKO stoppage at 2:30 minutes into Round 1. Having dismantled his opponent in only 150 seconds, Chandler backflipped off the cage to celebrate his arrival in the UFC.

His first UFC victory earned Chandler the UFC’s ‘Performance of the Night’ award worth $50,000. It continues his unparalleled rise as a professional MMA fighter: The decorated All-American collegiate wrestler made his entry into professional Bellator MMA in September 2010. Chandler left his mark as the world’s first three-time Bellator Lightweight World Champion and set a new record for most stoppages in Bellator history at 13. The hard-training Sanford MMA athlete signed with the UFC in September 2020.

With his UFC debut finally in the books, what’s next for Chandler? It’s safe to say that Chandler wants a shot at the UFC Lightweight Championship title sooner than later. Immediately after Saturday’s victory, he put the rest of the 155-pound class on notice: “I’m here to capture that UFC gold. We’ll sit back, we’ll see what is next.”

Thanks to the UFC for showcasing a world-class event despite the challenges of the global coronavirus pandemic and writing MMA history this weekend on Fight Island, Abu Dhabi.