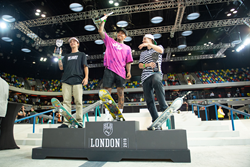 This is my tenth year in Street League, so I’m a veteran out here now. I definitely know how to let that pressure hype me up to get it done - Nyjah Huston

What an epic start to a history-making season. Monster Energy congratulates team rider Nyjah Huston on claiming first place at Stop One of the 2019 Street League Skateboarding World Tour at Copper Box Arena in London, UK. Dominating a high-pressure final featuring the world’s best street skateboarders, the 24-year-old from Laguna Beach, California, took the win in what was also the first official qualifier event for skateboarding’s debut at the 2020 Summer Olympics in Tokyo, Japan.

Now that SLS acts as the direct Olympics qualifier for the Street Skateboarding discipline, the field of riders this weekend was more international than ever in Street League history. In partnership with World Skate, the official governing body for skateboarding in the Olympics, each SLS World Tour stop this season includes a Global Open Qualifier for a chance to collect Olympic ranking points. In London, a total of 164 skaters from 45 national teams entered the Global Open and only the 10 best riders advanced into Saturday’s quarterfinals, where they met the highest-ranking SLS pros.

The level of competition among today’s top eight finalists left no room for error. Even making it into the top eight was a feat in itself, as several podium threats such as Yuto Horigome, Chris Joslin and Aurelien Giraud missed the cut. On the technically oriented course featuring long rails and plenty of banked kickers for creative transfers, the formula for winning was clear: Start stacking high scores early on – preferably with a Nine Club run score – and bring a versatile bag of moves to Best Trick attempts.

Straight out the gate, Monster Energy teammates Kelvin Hoefler and Huston revisited their rivalry by both putting down Nine Club first runs in the final. Hoefler set the bar high with a perfect run including backside lipslide the long flat bar, switch crooked and kickflip backside tailslide fakie down the Hubba, as well as Caballerial backside lipslide fakie and kickflip frontside noseslide down the big rail for 9.1 points. Huston fired back by sending a kickflip over the rail to bank, Half Cab flip and 360 kickflip over the bump, frontside feeble and frontside bluntslide the flatbar, overturned 180 to switch crooked the Hubba, plus backside 180 to nosegrind and overturned frontside 180 to fakie nosegrind (frontside Suciu Grind) down the big rail for a 9.3-point Run score and an early lead.

From there, the level of difficulty escalated in Best Trick attempts as Australia’s Shane O’Neill clinched the lead. Hoefler kept up with a Half Cab noseslide into a backside tailslide fakie down the rail for 9.0 points, while Huston fell behind after missing his first Best Trick attempt and Portugal’s Gustavo Ribeiro swept into the top spot. No stranger to finding a high-scoring trick when he needs one, Huston reemerged with a perfect frontside nollie heel to nosebluntslide down the big rail for 9.0 points. Hoefler stayed in the game by posting a Caballerial backside tailslide (8.0 points) and big spin frontside bluntslide fakie down the rail (8.7 points).

As the final session intensified with back-to-back Nine Clubs across the board, Hoefler could not lock in another high score and finished in fourth place with 34.8 points, closely missing the podium in a tie-breaker with O’Neill in third.

Facing tremendous pressure, Hoefler’s teammate Huston was more fortunate: The reigning SLS World Champion landed a highly technical backside nollie heelflip tailslide fakie down the big rail for 9.3 points. This sealed the win on his fourth attempt for a total score of 36.7 points and Huston took his last attempt as a victory lap in front of the stoked crowd at Copper Box Arena.

“This is my tenth year in Street League, so I’m a veteran out here now. I definitely know how to let that pressure hype me up to get it done!” said Huston upon winning the first tour stop of the 2019 SLS World Tour today. Speaking on the addition of Olympic qualifier rankings to SLS, Huston said: “We can already see it’s making skateboarding progress at a crazy level. We have new guys out here killing it and we’re only going to see it get crazier throughout the year.”

Huston ended his 2018 season with a win at the SLS World Championship in Rio de Janeiro and in March 2019 became one of 16 skateboarders chosen for the USA Skateboarding 2019 National Team to represent the U.S. at the Tokyo Olympics. Huston first stepped on a skateboard at the age of five and has not slowed down since: He made his X Games debut in 2006 at the age of 11 and became the youngest gold medalist in X Games Skateboard Street history at age 16 in 2011. He has won more prize money on the street competition circuit than any rider in history. Outside of the contest arena, he has raised the bar on the streets with influential video parts such as “Rise & Shine” (2011), “Fade to Black” (2014) and “’Til Death” (2018).

Monster Energy’s Matt Berger rose from the highly contested quarterfinals into the semis and all the way to the final eight. After dealing with injuries for the past three seasons, the Canadian tech skating powerhouse was back to full form. Berger covered the California Skateparks-designed street course with a perfect final run, including highlights like kickflip backside tailslide fakie and backside 270 lipslide down the big rail for an 8.4-point score. In the Best Trick section, Berger sent a technical big spin frontside bluntslide fakie (8.7 points) and joined the Nine Club with a kickflip backside tailslide bigspin out down the big rail for 9.1 points. After missing a chance to lock in another high score, Berger finished in sixth place in what was a grueling finals battle.

Now that SLS London is a wrap, look forward to Huston and his Monster Energy teammates Hoefler and Trey Wood at the inaugural X Games Shanghai from June 1 – 2, featuring nearly 100 world-class action sports athletes from around the globe. Next up, all eyes will be on the action at Galen Center in Los Angeles as the SLS World Tour returns for Stop Two on July 27 – 28, 2019.