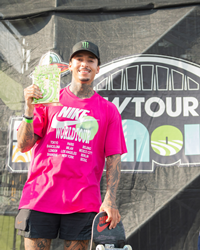 “Every win means a lot, especially this one coming back after Covid and not skating contests for a little while – it’s a special one! Thank you, Iowa. We are stoked to be back!" - Nyjah Huston

Skateboard competitions are officially back! Monster Energy congratulates team rider Nyjah Huston on taking first place in the Men’s Skateboard Street Final at Dew Tour Des Moines on Sunday. In the official Olympics qualifier event sanctioned by World Skate, the 26-year-old from Laguna Beach, California, rose to the top in a field of the world’s best street skateboarders at the newly built Lauridsen Skatepark in Des Moines. Huston was joined on the podium by 23-year-old Aurelien Giraud from Lyon, France, in third place.

This weekend’s Dew Tour competition was contested at the brand-new Lauridsen Skatepark in downtown Des Moines. Built and designed by California Skateparks, the 88,000-square-foot facility is the largest of its kind in the United States. The park was opened on May 7, 2021 and features a state-of-the-art concrete street course and park terrain section. Built as part of a $6.1 million project, the skatepark will remain a permanent fixture for the Midwest skateboarding scene.

As the first large skateboarding competition since the start of the COVID-19 pandemic, Dew Tour Des Moines attracted more than 300 male and female skateboarders from across the globe. Adding to the attraction, the street and park competition served as a global Olympic qualifying event – the only one held in the United States – for skateboarding’s upcoming debut in the Tokyo games this summer.

The event took place under stringent pandemic safety guidelines and with limited spectator attendance on site. Starting on Thursday, May 20, the field of competitors was narrowed down through a series of intense qualifier rounds and Saturday’s semi-finals. With coveted qualification points for the Olympics on the line, the level of competition was at a high all weekend.

Here’s how the action unfolded for team Monster Energy in Des Moines this weekend:

The Men’s Skateboard Street final on Sunday ended a weekend of world-class skateboarding on a high note. All eight finalists had emerged from the high-pressure semifinal featuring 32 skaters on Saturday night. Monster Energy’s Aurelien Giraud qualified in second place while Nyjah Huston made the cut in sixth place.

When the eight-rider final got underway, Huston proceeded to dominate straight out the gate. Starting in the Run section, the five-time world champion hit the California Skateparks-designed course with two perfect attempts. On Run 1, Huston put together a 360 kickflip the kicker, bluntslide fakie the flat rail, nollie frontside boardslide the rail, frontside bluntslide the tall Hubba, kickflip backside lipslide the kicker rail, big spin frontside boardslide fakie the rail, frontside nosebluntslide the ledge and backside 180 nosegrind the tall Hubba for 8.21 points and an early lead. In Run 2, Huston raised the bar by adding switch frontside tailslide down the rail and a technical half Cab backside smith to fakie the tall Hubba for a 9.10-point Run score.

When the action moved into Best Trick attempts, Huston maintained the pressure by sending a Caballerial backside noseblunt fakie (9.25 points) and switch frontside heelflip tailslide (9.14 points) down the tall Hubba. After missing his third attempt, and with Japan’s Yuto Horigome on his heels, Huston asserted his lead by pulling a Caballerial backside tailslide fakie down the Hubba for 8.41 points. On his final attempt, Huston sealed the deal with a trick he had not even landed in practice; a switch heelflip to frontside 5-0 grind down the tall Hubba for 9.56 points.

With a total score of 37.05 points, Huston claimed the title of Dew Tour champion in Des Moines. He also remains in first place on the official Olympic rankings for Skateboard Street with only a few weeks to go before the Tokyo Olympics this summer.

“Every win means a lot, especially this one coming back after Covid and not skating contests for a little while – it’s a special one!” said Huston upon taking first place in Men’s Skateboard Street at Dew Tour Des Moines on Sunday. “Thank you, Iowa. We are stoked to be back!”

Huston is the winningest street skateboarder of all time. The official U.S. Skateboarding Olympics team member is looking to represent the United States at the Tokyo Games in 2021 and is currently the only athlete ever to win X Games gold medals on five continents. After winning the first-ever X Games Real Street Best Trick competition in late 2020, Huston now owns 19 X Games medals in total (13 gold, 4 silver, 2 bronze). Huston is the current SLS World Champion after claiming his third back-to-back title in 2019.

Joining Huston on the podium in Iowa, Monster Energy’s Aurelien Giraud stepped into the final ready to send his signature big tricks. In the Run section, the 23-year-old from Lyon, France, put together a flawless first attempt: Frontside noseblunt slide the Hubba, hardflip to frontside boardslide the rail, backside overcrook the A-frame rail, backside feeble grind the flat rail, kickflip up the podium and a massive gap to backside noseblunt slide the Hubba earned Giraud 8.62 points.

In the Best Trick segment, the Olympic skateboarder riding for Team France sent a massive hardflip off the bump and over the rail for 7.71 points. On his second attempt in Best Trick, Giraud landed a hardflip to frontside boardslide down the tall rail for 7.89 points, thereby cracking into the top three on the leaderboard. Next, Giraud went into Nine Club territory with a perfect gap 360 kickflip to 50-50 down the Hubba for 9.12 points. And to lock in his podium spot, he dropped a perfect gap 360 kickflip to frontside nosegrind down the Hubba for 9.72 points – the highest-scoring trick of the final – and a strong third-place finish with 35.35 points total.

Aurelien Giraud first broke into the international spotlight by winning the coveted Tampa Am street skateboarding competition in 2015. After turning professional, Giraud proceeded to claim first place trophies in high-profile international contests such as Simple Session (2016 and 2017), FAR'n High (2019), and the French National Championships (2019). He also won the Dew Tour Championship title in 2019. Just recently, Aurelien Giraud starred in the first episode of the Monster-produced “Aspire – Inspire” mini-documentary video series detailing his preparations for the 2021 Olympics.

Each rider received two Runs as well as five Best Trick attempts to build a score composed of the four highest scores.

Monster Energy’s Rayssa Leal came into Sunday’s final as the youngest skater in an elite field including reigning SLS World Champion Pamela Rosa. No stranger to high-stakes contest situations, Leal put the rest of the field on notice by landing a perfect first run including backside Smith grind the A-frame rail, gap out to crooked grind the Hubba, frontside feeble grind the rail and backside lipslide the eleven-stair rail for 4.25 points. In Run 2, she upped the difficulty with a frontside bluntslide the A-frame rail, and backside 5-0 grind the tall Hubba for 4.62 points.

Going into the Best Trick section, Leal maintained her streak of perfectly landed tricks with a frontside bluntslide down the big rail (3.33 points) followed by a perfect frontside nosegrind (2.15 points). Reaching deep into her bag of tricks, Leal pulled a highly technical kickflip frontside boardslide the big rail for 4.18 points. Rounding out her strong performance, she finessed a stylish backside Smith grind down the big Hubba for 4.25 points.

Leal first attracted attention in 2015 at the age of 6 by heelflipping down a set of stairs while wearing a fairy costume in a video that went viral across the globe. She has since proven a strong competitor at the highest international level: In 2019, she made history as the youngest competitor to ever win an SLS tour stop at age 11 and took second place at the SLS World Championship in Brazil that year. Before the pandemic, she also won the FAR'n High competition in France and placed fourth in her X Games debut in Minneapolis in 2019. Watch closely as Leal is poised to head into the first-ever Olympic street skating competition.