Monster Energy congratulates Pat Casey and Andy Buckworth on their second and third place finish at the final stop of the Toyota BMX Triple Challenge in Denver, Colorado. 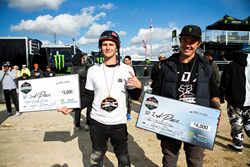 I just made sure I could 360 that first jump and then I was fine. I love big dirt jumps and these events are one of my favorites of the year because of that—the bigger jumps, the bigger the tricks you can do - Pat Casey

Monster Energy congratulates Pat Casey and Andy Buckworth on their second and third place finish at the final stop of the Toyota BMX Triple Challenge in Denver, Colorado. It’s been 13 years since a Supercross hit Denver, Colorado, and with its return came the highest level of dirt riding at the Toyota Triple Challenge. The final stop of the year pushed progression even further with the biggest jumps ever seen at the series, and arguably the largest of any event. As always many of the best riders in the world, along with hungry up-and-comers converged on Colorado to see what they could get done.

The qualifying event on Friday wasn’t open to the public, but the level of riding remains unchanged. Although the Denver setup did bring one huge difference: the jumps themselves. A 20-foot-tall roll-in lead straight into a towering 10-foot lip that had two paths, left or right, into two different landings that we’re pitched the opposite direction. The odd, creative setup threw a lot of riders out of their comfort zone. One of those riders was Monster Energy’s Casey, who went down hard on his third run of the day and was forced to sit out for the rest of Friday’s practice. Fortunately, Casey was already pre-qualified to semi-finals based off his win in Anaheim. Twenty-six other riders weren’t so lucky and had battle it out for the 13 open spots in semi-finals. At the end of the day, Monster Energy’s Andy Buckworth, James Foster, Jack Borthwick and Monster Army’s Bryce Tryon proved themselves to be worthy of the semifinal in front of a packed crowd.

They say Denver is the land of four seasons and Saturday’s event proved just that. Overnight rain gave way to snow for the first half of the day and doubt began to creep in whether or not the event would even happen. Fortunately, around 1 pm the sun came out and the build crew used blowtorches to dry everything. The weather delay meant that the semi-finals were cancelled and the finals would feature all 16 riders in one “battle royale” of sorts.

With his knee still banged up and the jumps running a bit slower than the day before, Casey was definitely a bit shook going into the day. With just an hour or so of practice before finals, Casey dropped in and systematically built up his confidence. He got over the 360 that took him out the day before and by the time he took his run, he stomped a 360 triple whip over the first set followed by a cash roll over the second.

That combo earned him second place. After the event, Casey was glad to be on the podium.

“I just made sure I could 360 that first jump and then I was fine,” said Casey. I love big dirt jumps and these events are one of my favorites of the year because of that—the bigger jumps, the bigger the tricks you can do.”

Buckworth came out firing in finals with his signature double backflip on the first set, but the first jump really made it more for him.

“That jump was something I wanted to double flip as a personal goal just because it was a challenge–and it scared me,” said Buckworth. It was something that I was definitely sweating because I just didn’t know what was going to happen, but we are there to roll the dice and it paid off in the first run.”

His first run did pay off, but he continued to stomp the double flip in all three runs. Unfortunately, Buckworth went down on his third run on a front flip superman, which could have bumped him up from third place, but he was happy to be on the podium.

“At the end of the day, I was really stoked to be on the podium again, said Buckworth. It’s the best feeling ever.”

Tryon put up his best placing to date by scoring fifth place with a superman-to-barspin over the first set and a cash roll over the second.